Hermes A1 US Test Rocket 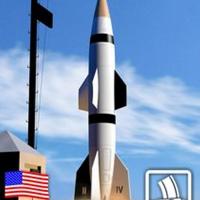 After World War II US Army intelligence gathered data and components from the German Wasserfall program. Based on this information General Electric constructed the Hermes A1 rocket which was almost identical to the Wasserfall with the exception of the mid-body fins. Five Hermes A1 rockets were successfully launched at White Sands proving grounds between May 1950 and April 1951.

The Brengun Hermes A1 is molded in medium grey soft plastic with a small photo-etch fret. Flash is minimal the kit offers recessed panel lines however some of these panel lines are partially filled in and will require re-scribing. There is a slight pebbly texture to the plastic typical of many short run plastic kits; a session of sanding with fine sand paper fixes this issue. A couple of the trolley wheels have noticeable sink marks. There is a small decal sheet with markings for three of the test rockets. The instructions are clear and easy to follow.

Assembly was straight forward with the Hermes rocket coming together quickly. I spent more time building the trolley and scratch building the base than I did building the rocket. The trolley parts were rougher and had some flash to clean-up. As mentioned earlier a couple of the trolley wheels had sink marks, to remedy this I drilled the lightning holes on the wheels a little deeper and placed small punched plastic discs at the center of each wheel, this reduced the effect of the sink marks to my satisfaction. The main trolley assembly required careful alignment; once this was done all was set aside for painting. I visited the Brengun website and noticed they also offer a resin base for their Hermes A1; I wanted my rocket and trolley to be displayed on a base. I decided to make my base from scratch based on the pictures I saw on the Brengun website.

I used Tamiya acrylics for all my painting on this project. You can’t have it any easier than painting the rocket flat black, flat white and flat orange. The challenging part of this session was the masking, but overall that was more tedious than difficult. The Trolley was painted Tamiya RAF dark green with some dessert sand to lighten it up a bit. The assemblies were then shot with future to seal everything for decals and washes. I chose to use the decal markings for rocket #4 as seen in the picture on the Wikipedia site. The decals went on with no silvering using Micro Set/Sol. I then gave everything a wash with Davies grey mixed with some raw umber water colors. The trolley and base were then dusted with some pastel powder to complete the weathering.

I really enjoyed this diversion from my usual aircraft and armor projects. I can recommend this offering from Brengun without reservation. It will appeal to all skill levels and is an ideal introduction to those wanting to embark on limited run multi-media kits. I was very pleased with the end result and may get the Brengun Wasserfall to complete the bookend set.

Thanks to Hauler/Brengun and to IPMS/USA for the opportunity to review this sample.