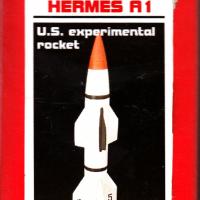 The Hermes Program was a post WW-II American program which utilized German missile designs. Best known of this series was the Hermes A2, which was the A-4 (V-2) copy. The Hermes A1 was based on the Wasserfall, a surface to air missile developed at Peenemunde in 1942, but which never reached production. General Electric developed an built the Hermes A1, which was about ¼ the size of the Hermes A2.

The other big difference between the A1 and A2 was that the A1 had 4 extra fins on the sides of the rocket body. This was to allow greater maneuverability when the rocket was being guided to a target aircraft. The guidance was done visually during daylight and with radar assist at night. Steering from the ground was done with a joystick.

Five A1s were successfully tested at White Sands Range in New Mexico in 1950 and 51. The entire Hermes program was canceled in 1954.

You get 4 sprues of fins, each having the tail fins, the guidance fins and the body fins; a separate sprue for the rocket body, and three more with the launch pad, the rocket cart and the wheels for the cart. There’s also a PE part for beneath the rocket’s tail on the launch pad and decals for three Hermes A1s.

The tail fins are in two parts, a stabilizer fin and the steering fins which are behind the stabilizers and extend into the rocket exhaust. This allowed steering at lower speeds by redirecting the flow of the exhaust gases.

The project begins with cutting the rocket body off the sprue at the tail end and drilling a hole for the rocket exhaust. Next I cut the sets of fins off the sprues. I used decal scissors for this, as the parts are pretty thin and I can cut straighter with scissors than with a knife.

The rocked body is clean, with no notches or indicators for locating the fins. There are panel lines for the nose cone and other panel lines, but these don’t line up with the fins. Therefore this becomes a project. Getting the fins perpendicular to the body and evenly spaced took some work. Thick CA plus accelerator helped a lot here.

The launch cart has 4 separate railroad type wheels and the metal rocket holder. These were assembled with CA. I noted that the PE fret had “Wasserfall” as the part identifier. When I checked the Brengun catalog, I found that they also offer Wasserfall models in 1/144, 1/72 and 1/48.

Once the fins were attached and I was satisfied with the alignment, I painted the missile.

I painted the entire missile white. This is one place where I missed Folquil’s Reefer White. The new white paint went on evenly and covered well, and I masked the body with Tamiya tape for the nose cone. The paint came off with the tape when I removed it.

Step two was to repair the missing paint with a brush.

Step three was to make black stripe decals to go above and below the forward fins.

Step 4 was to use Post-It notes to mask the rocket body while I painted two of the fins black.

I had finished painting.

I used the black stripes for the rocket body. The provided decals worked fine. I had a problem with one which came off the backing paper sooner than I expected and folded while still in the water. I was able to get it straightened out and it went on nicely. There are 6 black numbers for the white tail fins, and 2 white numbers for the black tail fin.

Highly recommended. This is an interesting subject from the early days of missiles. The assembly was fairly easy, the instructions were OK, and the decals were good.

Many thanks to Brengun/Hauler the kit, and to IPMS/USA for letting me build and review it.

with decals
Previous Next