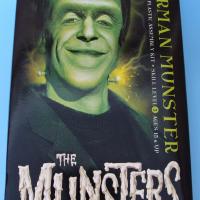 Mention “The Munsters” and instantly the vision of an odd family on Mockingbird Lane comes to mind. Fortunately Moebius has introduced two new kits to bring the 60’s family icons of Herman and Grandpa to life in a pair of kits that combine to make a nice diorama of the duo. Moebius also did a great job with the sculpts, bringing the likenesses of Fred Gwynn and Al Lewis to life.

Opening the kits reveals both are very easily constructed kits. Herman is comprised of approximately 50 parts. The sub-assemblies fit and line up very well. The mold lines are very minimal and all joints are where seams in the clothing would be anyway. I would have liked to seen the head be one piece rather than a front and back with a top hat insert that makes for a cumbersome seam to camouflage on the head. I used some Citadel green stuff putty to fill the seam and sculpt the hair line in. Another fit issue I ran in to was in the shoulder joint. Minor fixes are carving down the peg or opening the connection point.

With all of the sub assemblies complete and test fitted I moved on to painting. Fortunately, I had picked up a copy of Famous Monsters magazine a year ago, and it focused on The Munsters with tons of good reference material. Rather than going with the recommended instruction sheet colors, I opted for a purple-tone black and white TV make up per the reference centerfold of the family in the magazine, and other shots throughout the magazine. I started with a base coat, followed by washes and adding highlights until I was happy with the finished result.

One note is the detail in Hermans hands could have been done better in my opinion with recessed detail. Painting can make the hand look more detailed and open, but I would like to have seen a single, well-detailed piece rather than a two-piece hand for the left. After finishing up the face and hand portions, I moved on and base coated all of the body assemblies. I did the bulk of shading and highlighting before assembling the whole body, and then blended the pieces together with the same colors using my airbrush.

The bases were both coated in gray, then using my airbrush, stippled with black, white, and blue for a textured rock look and finally washed with Citadel Badab Black (Nuln Oil). I then moved on to the table portion of the kit, building sub assemblies and painting them.

Overall, the fit of the kit is great. The seams were easily sanded and covered up. I wasn’t a fan of the molded cobwebs, so I tore apart a Q-tip and pulled it to simulate cobwebs. I think the beaker and lab accessories could have been omitted also in lieu of something else from the show. But I used them to add to the tabletop. All sub assemblies complete and assembled, I attached Herman and the table to the diorama base and set it aside.

Opening up Grandpa Munster’s kit reveals an even simpler kit to assemble. A total of approximately 20 pieces makes up the kit. I used the same paint scheme on Grandpa’s face as the TV make up and used the same paint progression as on Herman for the face. Again a one-piece head sculpt would have been great. However the head for Grandpa is two pieces and a seam right along the front hairline is problematic. Some fine hobby knife work and creative painting can hide the seam.

The body parts all fit very well again, and lined up really well requiring minimal sanding. The only trouble spot was the coat tails. I ended up removing the mounting pin for the pants from the coat tails and gluing it to the main portion of the jacket and filling the seam. Of course it’s open to interpretation how the jacket is made. All of the subassemblies were painting individually and detailed, then completely assembled and blended together with my airbrush.

The base for Grandpa was done in the same fashion as Herman and at the same time so they matched. The final piece was the control panel to complete the diorama. Plenty of detail is sculpted in which gives the modeler good potential for adding life to the overall combination of the two dioramas. Included with Grandpa Munster’s kit is a book and molded cob webs which I omitted from my build.

Overall the kits are great and a nice project for anyone wanting to try their hand at figure painting. Though the kits are separate, both kits are referenced on the other’s box art. Also, both kits have the cable and connector pieces to combine the diorama’s working parts in the apparatus and control panel. As stand-alone kits Herman and Grandpa don’t tell much of a story, and leave a person looking at them and asking “What’s the story?” As a good diorama should do - tell a story - the builder is compelled to buy the other half of the diorama. That said, I would like to have seen Herman and Grandpa come as a combined kit for a lower street price from Moebius. The potential is there if Moebius chooses to add more of the family to the existing diorama so that will be interesting to see.