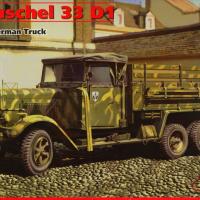 When I think of “Blitzkrieg,” I usually think of grey Panzers sweeping across the Polish, French, or Russian countryside, followed in hot pursuit by armored half tracks. The concept of Blitzkrieg required mechanized movement of weapons, men, and supplies. And, while the Germans used more horses than vehicles in the invasion of Russia in 1941, they did have mechanized transport in an attempt to keep pace with the tanks and half tracks. And here for the first time as an injection plastic model in 1/35th scale is the German truck produced in the highest numbers before and during WW2 – 22,000 units, in fact.

ICM, a manufacturer of injection plastic kits from the Ukraine, has of late been making quite a name for itself producing models of WW2 transport vehicles. Together with the Henschel 33 D1 being reviewed here, ICM has the following truck kits in its current catalog: Krupp L3H163, Ford V3000S, and the Studebaker US6. If these are as nice as the Henschel, they would all make worthy additions to your model collection.

The Henschel kit comes molded on seven sprues, six of them in tan plastic and a seventh in clear for the windows, headlight lenses, etc. There are no photo etched parts in this kit, the only additional item along with the plastic parts and instructions being a nicely printed decal sheet covering four vehicles. The plastic parts are extremely well molded, with no flash present on the parts in my kit, and only a few ejection pin marks, none of which were visible on the completed model. No putty was used during the construction of the model under review and, with careful clean up of the parts and test fitting, everything assembled nicely.

One issue with the kit is the plastic used. It had the consistency of, for lack of a better word, Ivory Soap – almost “gritty” when you cut into it. This in no way ruined the detail shown on the plastic parts, but I found the plastic to be brittle in some instances. Thus, parts that were thin in diameter, such as a number of the suspension parts in Section 9 of the instructions, A25 and A26 in particular, were VERY easily damaged during attempts to get them off the sprue. In fact, a couple of these parts had shattered prior to me attempting to remove them, sometime between being ejected out of the molding machines and their arrival on my workbench. Another area of weakness on my kit was in Section 3, running board support bracket parts E4 and E5. On both sides of my model, these parts shattered with the tiniest pressure applied to them, and had to be reinforced with brass rod. Other than these couple of areas, little else was cause for concern during the assembly of the plastic parts.

The detail contained within the kit is top notch. Construction starts with a 22 part engine in Section 1 and 2, and Section 3 through 9 covers construction of the highly detailed suspension and drive train units. Much care and test fitting is required here to insure that all the parts line up correctly and sit at the correct angles. Otherwise, when you go to attach the wheels in Section 10, there will be problems. The front two wheels can be positioned at different angles, which is a nice touch.

There is a detailed cab interior, with printed instrument decals for the driver’s console. A very nicely detailed steering wheel, three nicely detailed shifting and braking levers, and four floor pedals round off the interior nicely. Separate door handles on both sides of each door are included. The front windows of the driver’s cab are a six-part affair and, as always with clear parts, care must be taken to have the panes of “glass” correctly sized to fit the window frames and glued in very carefully with the appropriate cement. Care must then be taken to make sure undue pressure isn’t applied to these parts, or the glue “fails” and the windows pop out.

The remaining Sections of the instructions detail the assembly of the truck bed and sides. Lots of parts, lots of detail, and it will all go together neatly if you take your time and test fit parts carefully as you advance forward. The couple of parts here I did not care for were the slats for holding up the canvas rear cargo area cover (a cover was not included in the kit). These are a standard inverted “U” shape, but each slat came in three parts. And they didn’t assemble together well at all for me, so I dispensed with them, and will scratchbuild some replacement parts out of Evergreen plastic stock shortly.

I painted my model an early war Panzer Grey, utilizing Tamiya XF-63 and Mr Color Self Leveling lacquer thinner. The decals, as mentioned earlier, cover four different schemes and were well printed and went on the model without any issues by using my favorite setting solutions, Mr. Mark Softer and Mr. Mark Setter, from Gunze Sangyo. I utilized the markings for a vehicle from “Russia, 1941”, though, which unit the instructions don’t say. The other three marking choices are a Panzer Grey vehicle from “France, 1940”, a Panzer Yellow vehicle from “Italy, 1943”, and a Panzer Yellow and Panzer Green vehicle from “France, 1944”. Again, no information is provided within the instructions about which units these vehicles come from.

ICM’s Henschel 33 D1 truck model, then, is an extremely well detailed kit that, with care taken in following the instructions, and making sure everything is squared up, will allow the modeler to build a very nice example of this important WW2 German military truck. I would like to offer my sincere thanks to Hobbyterra for providing this review sample, and IPMS/USA for allowing me the opportunity to review it.