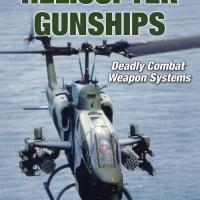 Helicopter gunships evolved from the need to provide close quarters combat for the Army. While we think this is a natural thing, the earliest attempts to arm helicopters were frowned upon. It wasn’t until the French started to put guns on some of their aircraft that the US Army took notice. What followed was nothing short of phenomenal culminating with the first purpose built armed helicopter then onto a battlefield essential tool.

This hardback book includes 208 high quality pages with over 360 photos, many in color. Wayne Mutza is well known in the helicopter community for his expertise and vast photo collection. This book is no different. The book is an easy read and follows the development of the armed helicopter from the end of World War II to present day. The entire history is covered in text and photos. The photos are quite unique showing the developmental progression, especially with the US forces. There are many previously unpublished photos that come from a variety of collections.

There are so many different configurations of armament on the helicopters there is something for every modeler in here. Everything from the spindly H-13 to the huge CH-54 is shown carrying a variety of armament from a single machine gun to the daisy cutter bombs. The Vietnam War showed what could be done when you let the war fighters design what they need.

There are chapters that cover each specific armed service. When people think of helicopters many think of the US Army, but the Marines, Navy, Air Force and Coast Guard all have a variety of helicopters that they have armed and developed. The Marines were instrumental in the development of some systems.

The Huey, Cobra, Kiowa Warrior, Loach, Shawnee, Sea King, Blackhawk, Chinook, Apache, Comanche, Mi-8, Mi-24 and many others are all included. Obviously the Huey and the UH-34 take up a lot of the book as they were instrumental in the early armed helicopter design. The Cobra, the first purpose built attack helicopter in the world, is also shown to great advantage. All versions of the AH-1, Army and Marines, are included in the book. It also explains the development of the airframe which can be confusing to some. On the modern battlefield the Apache and Kiowa Warrior are essential so they are included as are Little Birds.

OK so there are a lot of armament systems included, but one thing that is really nice is the immense collection of nose art and aircraft markings. For the model builder this book is a boon of information and inspiration. Many of the photos in the book are large and quite useful to the modeler.

The Vietnam War is covered, as well as, Desert Storm and Iraqi Freedom. New helicopters, such as the Kiowa Warrior, Loach and Apache, are followed. Some UAVs are covered such as the Fire Scout. International gunships are covered as well, though not in the same detail as the American ones.

I thoroughly enjoyed the entire book. The photos are really nice and the text explains everything and the reasoning behind certain decisions. As a model builder this book will provide large, mostly color, photos that will be an inspiration. As a historian, this is the first time all this information has been collected in this detail in one place. As an attack helicopter pilot, I loved reading about the pioneers that came before me who made it all possible. If you like helicopters this is definitely a book for you. If you were going to have one book on attack helicopters this would be that book. My hat is off to Wayne Mutza for this wonderful book.

Thanks to Specialty Press for the review copy.

Sample pages from Chapter 10
Previous Next