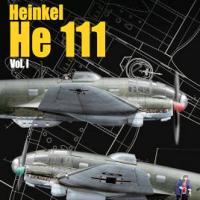 The Heinkel He-111 is one of the most iconic symbols of World War Two, as well as a major feature of the Battle of Britain. The aircraft was developed under the guise of a passenger airliner as most of Germany’s other armaments at the time. During the late 1930’s the aircraft and its German aircrews participated in the Spanish Civil War and the He-111 began its wartime career. During World War Two various modifications were made throughout the aircraft ranging from the cockpit layout, wing shape, engines, offensive and defensive capabilities and many more. The aircraft was the second most produced bomber aircraft of the Luftwaffe behind the Ju-88 and served in the Spanish Air Force until 1958. The are only 4 surviving aircraft remaining in various museums around Europe.

The Topdrawings paperback from Kagero is a 24 page book with a very brief history of the aircraft itself that is provided in both English and Polish. The subsequent pages are filled with numerous black and white line drawings of the aircraft itself represented in 1/72 and 1/48 scale. The drawings comprise of the various aircraft ranging from the A,B,C,D,E,F,G,J, and P variants.

Most of the line drawings are of side profiles with expanded close up drawings on engine nacelles and other distinguishing aircraft features. In the center of the book there are 3 detached sheets of 3 view drawings in black and white line diagrams of the aircraft and its variants along with cross sectional diagrams. The book also includes 3 color panels of operational aircraft and its markings with a caption of the specific aircraft.

The last section of the book includes more line diagrams of the various models and have highlighted in gray exactly what those changes to the aircraft were. I personally like this feature as it makes it very easy for the reader to actually see what the changes were. Information such as this is invaluable for us in the modeling community especially for trying to make modifications or scratch building. With modelers in mind Kagero has included with the publication 2 vinyl sheets. The fist sheet is for canopy masking in 1/72 and is sized for the recently released Airfix kit. The second sheet included is in 1/48 and is for German identification crosses located on its wings and fuselage. I’m sure these would be able to be used on the Revell/Monogram and ICM kits currently available.

Overall, I like this book and would like to thank Casemate Publishers for supplying IPMS Reviewer Corps for this copy. I have personally never looked at one of these publications before and was pleased to discover a new outlet for modeling information. In the back of the book there is a pictorial catalog of their other subjects and there are a few others I would be interested in obtaining. Looking forward to Volume 2.