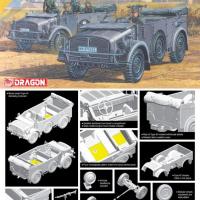 When I first received this model kit for review, the title that Dragon Models gave it, “Heavy Uniform Personnel Vehicle Type 40” had me confused. It clearly looked to me like the Auto Union/Horch 4x4 Type 1a produced by Tamiya in 1/35th scale way back in the 1970’s. And sure enough, this is what the kit turned out to be! And to be fair to Dragon, the vehicle was indeed a “heavy” (as compared “medium” or “light” weight) 6 man personnel vehicle. The kit is in fact “kits”, as Dragon gives the modeler two identical kits within the same box.

The bulk of each kit consists of a one piece body, incorporating the under chassis frame, and the upper body hood and main body side panels. This utilizes the latest slide mold production technology for an amazingly detailed one piece unit. To this the modeler adds in Section 1 & 2 of the instructions: the wheels and drive train parts, together with the exhaust parts. Section 3 of the instructions covers the addition of the vehicle’s bumper and external lights, siren and Notek light, together with the internal parts: seats, steering wheel, hand brake and gear shift, plus the windshield and canvas wet weather cover parts (in the stowed position). The kit gives the modeler one option: a clear windshield with molded on wiper blades, or a part depicting the vehicle with a canvas covering over the windshield to be installed in the lowered position.

As stated all these parts are extremely well detailed for the scale, and for the most part they assemble together quite well. The one exception for me was part B31, which is the pedestal mounted machine gun. This I found basically impossible to straighten out convincingly (it had a slight warp to it out of the box). I thus left it off my model. Another area that leaves something to be desired: because of the one piece main body unit, while the exterior of the vehicle’s four doors are well defined, looking at the interior of the model, the doors are not defined at all. In other words, if you look at the interior of the main body, it appears the vehicle doesn’t have separate, opening doors.

The kit instructions provide the modeler with three color schemes: a panzer gray vehicle from the Eastern Front, 1941; an overall Panzer yellow vehicle with red and green camouflage pattern, Eastern Front 1943; and a dessert yellow vehicle, North Africa 1942. Unfortunately all three are listed as “unidentified unit”, and so come without any vehicle markings other than license plates. And even the license plate decals are generic, in that Dragon Models provides the modeler with a series of individual numbers which then must be “assembled” into a front and rear license plate. This is a real chore, and to get them evenly spaced, a major challenge. Frankly, I would have much preferred two or three “preassembled” plates! I chose to build the Panzer Yellow vehicle, with red and green squiggle camouflage, utilizing Tamiya brand acrylic paints, and Mr. Color Self Leveling lacquer thinner.

So did I like this model? Yes I did. It assembles into a nicely detailed small scale model of this important German military personnel carrier. The one major “issue” is the lack of door demarcation on the inside of the main body part. However, once the interior seats are installed, this “issue” is much less glaringly obvious.

I highly recommend this kit to anyone who builds 72nd WW2 German military vehicles.

My thanks to DragonModels USA for providing IPMS USA with this review sample.