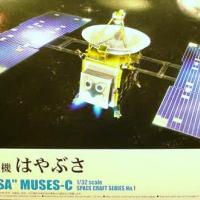 For seven years, 1 month and 4 days, Hayabusa (translated as Peregrine Falcon) traveled to and from the asteroid, 25143 Itokawa. Returning to Earth, the Hayabusa, or more precisely, that portion of the spacecraft designed for re-entry and landing on Earth, landed near Woomera, Australia. Hayabusa returned particles of the asteroid for study, resulting in a significant advance in our knowledge of asteroids and, at the same time, setting a high standard for future flights of this nature.

Aoshima has released several models of spacecraft recently, adding the Hayabusa to that distinguished and long list of “space” related models. It can be argued that this model provides the builder with the smallest model of a spacecraft on the market. No, it is not the Hayabusa, but rather the Minerva component which accompanies the Hayabusa in the box. The Minerva is, in the real world, a coffee-can sized “lander” that was designed to touch down and hop around the surface of the asteroid. The Minerva can be seen in the accompanying images hovering just above the asteroid base. This kit is in 32nd scale, a circumstance that makes it convenient for display and comparison to Monogram’s Apollo CSM in 32nd scale. The kit contains no decals, nor should it, since there were no markings on the Hayabusa which would need to be duplicated in model form. The kit contains 3 part trees, marked A, B, and C, which hold 39 parts, including 3 parts which make up the display base. All parts are cleanly molded with no flash.

The instructions feature a brief history of the Hayabusa, but it is written in Japanese with no English translation. There are 10 steps in the construction process, all illustrated with simple, one-sentence directions in both Japanese and English, for part placement and preparation. The illustrations and English “directions” are more than sufficient to guide the modeler through this rather simple project. There are some quaint “lost in translation” occurrences, but they cause no difficulty and do not result in any misunderstanding of the illustrations. For example, in step 1, an English phrase states, “Convex is a center.” What is actually meant by this phrase is that a convex groove in the piece to be attached to the model marks the centerline and fits into a specific slot in another part.

On that section of the instructions which can be used to purchase replacement parts a sentence reads, “For Japanese use only.” You are clearly out of luck if you are not Japanese! Clearly, what is meant is, “For Office Use only.” I really get a kick out of little items like these two examples.

The solar panels are one of the more noticeable features on the Hayabusa, and Aoshima made an effort to provide surface detail on those parts. The solar cells are separated by a raised dam on all four sides of each individual solar cell. The reverse sides of the solar panels are detailed with a wiring harness that is represented by a series of finely molded raised surface detail. Aoshima engineered some “overflow” nuggets on the panels, the purpose of which is to drain off excess material as the part is molded. These overflow nuggets are clearly marked on the instruction sheet and are identified as parts to be removed. I mention this small feature because it shows the care and thought that went into the production of this model. There are no issues anywhere in the assembly process. The fit is snug and clean, and this model requires no seam filling.

The paint scheme relies upon the full sized mockup of the Hayabusa located at the JAXA facility, the Japanese equivalent to the Houston Space Center. The color coding system used by Aoshima is clear and easy to follow. No specific brand of paint is recommended.

Aoshima provides a cleverly designed display base upon which the Hayabusa rests. The attachment point allows the Hayabusa to pivot along its equatorial plane. The design of the attachment point allows the Hayabusa to be “snapped” onto the display stand but does not require glue. The vehicle can be removed easily if one wishes to do so. The base represents the potato-shaped asteroid, which was the target for Hayabusa, and is represented in the kit by a part which is wholly unmistakable as representing Itokawa. The finished model is not large. The model, when resting on the base is about 7 inches high and about 8 inches wide on all four sides.

From start to finish this model can be built a single day, if one wishes to do so. For the more experience modeler the opportunity to do more to the kit than is called for in the instructions is an option. The model, out of the box, is a solid foundation for a more detailed project. Foil can be added, for example, and the solar panels can be cut and attached in a “hinged” position rather than the full “open” position. The more experienced modeler may wish to replace the molded wire harnesses on the underside of the solar panels with homemade harnesses, but I found that beyond the scope of this kit review. If a fault is found in the model it is that the antenna is a solid piece of plastic whereas one would wish for some sort of “mesh” antenna, as deployed on the real Hayabusa. This is a small point and one that does not detract greatly from an outstanding model. Aoshima did an outstanding job providing the Space fan with a wonderful model of the Hayabusa and this kit is highly recommended to modelers of all ages and skill levels.

Thanks to the fine folks at MRC-Academy for the opportunity to review this very fine model.