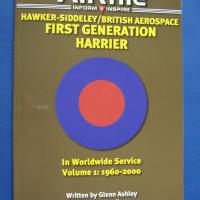 The Harrier is one of the most easily recognized modern jet fighters and has been so since its introduction into the RAF in 1969. It certainly is one of the noisiest, particularly when in VTOL mode. This excellent book is another of the ongoing AIRfile publications covering British aircraft. As in their other books, this volume is full of relevant information and color profiles, this time focusing on early versions of the Harrier. The chapter titles speak for themselves:

The author traces the development of the initial aircraft, the P.1127, through the first operational version, the GR.1. Further improvements in avionics housed in a "dolphin nose" led to the GR.3. The color profiles all have a short explanatory paragraphs with them and trace the operational deployment of these versions of the Harrier. The same follows for the Sea Harrier which became operational when the Royal Navy retired their big aircraft carriers. Both the RAF and RN Harriers came into prominence during "Operation Corporate," the war in the Falklands in 1982. Overall, the Sea Harriers had more variation in their camouflage schemes and the book depicts this in the many color profiles and 4-view drawings.

Such a radical design fostered the need for a training version so pilots could safely transition to this unique aircraft. The author explains the need for such a machine and the development of the different versions. I think all the trainers have a common trait - they look ungainly with their extended rear fuselage and raised canopy for the additional instructor pilot.

The last chapter covers the Harrier in foreign service. The first export customer was the USMC who ordered the basic GR.1 in 1970. Spain, India, and Thailand also flew these early versions. Again. there a lots of color profiles to depict the camouflage schemes of these aircraft.

The Harrier is well represented to the modeler with many companies offering the different versions of this aircraft. Airfix has recently released a new GR.1 in 1/72 scale to accompany their fleet of early Sea Harriers. This book would be a great reference for their paint schemes. I would heartily recommend this volume to any one interested in the Harrier or modern jet fighters.

My thanks go to AIRfile Publishing for providing this book for review and IPMS/USA for the chance to review it.