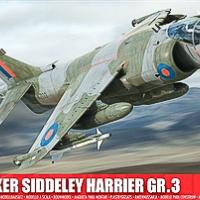 Airfix’s 1/72 Hawker Siddeley Harrier GR.3 represents an important version of this aircraft, as recounted on the side of the box: “Developed in the 1960s as the first truly successful V/STOL combat aircraft, the Hawker Siddeley Harrier proved a revelation upon entering service in its earliest from, the GR.1. However, some improvements could be made and this came in the GR.3, which featured better sensor in the nose and tail, as well as a more powerful version of the Rolls Royce Pegasus engine. The GR.3 was the first of the Harrier variants to see combat, joining Operation Corporate, the re-taking of the Falkland Islands, engaging Argentinian Forces in ground attack missions. Replaced by the GR.5 Harrier II, the GR.3 proved itself to be a capable and successful aircraft.”

You get 105 parts in Airfix’s familiar light grey soft plastic, with a sprue of five clear parts. There is minimal flash, a few shallow sink marks, and seam lines between the intakes and front exhaust nozzles. All of the parts can be cleaned up and prepared for assembly in little time. The clear parts are in their own plastic bag preventing any scratches. I did find a dark spec imbedded in the sliding canopy hood that was impossible to remove; I left it as is. The right-side panel of the windscreen had some slight distortion that would prove too difficult to remedy, so it also was left as is. Both canopy blemished are only noticeable if you use magnification or put you eyeball on it. The decal sheet is by Cartograf. The decals are in register, and there are enough stencils to give you hours of fun. There are two marking options provided; the first is No. 1(f) Squadron HMS Hermes Air Group, South Atlantic, May 1982 and the second No. 4(r) Squadron, RAF Gutersloh, RAF Germany, 1980. I chose No. 1 Squadron as I wanted my Harrier to represent one used during the Falklands Conflict.

I first examined the kit instructions and test fitted the main components. I was impressed with the thoughtful engineering of the kit. Beginning with the ejection seat, I chose to busy it up a little by adding a harness and ejection pull loop. Next, I assembled and added details to the rest of the cockpit. The internet was helpful in showing me what bits to add in order to make the front office look busy. The interior was painted and left for later. I then assembled and painted the intakes and front wheel well. All the interior parts were then added to the inside fuselage halves. The intake, wheel well, and cockpit were cleverly engineered, and the fit was good. The rear wheel well/speed-brake well, part A2, didn’t fit very well, and it required a little fettling to get it satisfactory. The rest of the kit assembly was straightforward and mostly uneventful. I did need to lightly putty and sand some joints here and there but nothing excessive. It didn’t take long before I was ready to paint the airframe.

The canopies were cleaned up and masked, and all the little bits were prepped for painting. As mentioned earlier, I chose to do my GR.3 as Red 10 from No. 1 Squadron during the Falklands Conflict. The Harrier was painted overall dark sea gray. I made scaled-up copies of the painting diagram to fit the kit dimensions. These copies were used to make paper masks. I made tiny loops of masking tape to raise the paper masks above the model’s surface. This way, I could get a tight, soft edge between the gray and green camo. After all the tedious masking was done, I shot the exposed surfaces with dark green. After a few sessions of fixing overspray, painting olive drab on the vertical fin, and painting the rear wheel/speed-brake wells light gray the Harrier was almost ready to leave the paint shop. The final step was to seal everything with Future and prep for decals.

The stencil decals were the first to be applied, followed by the national markings, and finally the individual aircraft makings. The decaling was done over several evenings to ensure that care was taken to bed them down and control silvering. As mentioned, there are a lot of stencils; they took 80% of my total decaling time to apply. Airfix has out sourced their decals to Cartograf, which proved to be a wise choice as they performed without issues. I used the Micro Set/Sol system to fix all of the decals in place. The Harrier was given a final shot of Future to seal all the decals.

All the Harrier’s panel lines were given a wash using MiG Neutral Wash. The control surfaces were highlighted with MiG Dark Wash. For the finishing coat, I decanted Tamiya Semi-Gloss from the can into a bottle. I like to use decanted aerosol finishes as I feel that I have more control spraying them out of an airbrush than I do out of a can. Once I was satisfied with the appearance of the Semi-Gloss, I set the Harrier aside for a day before I began final assembly of the small bits.

I was pleased with the final outcome of my Harrier GR.3. The only real issues encountered were a few shallow sink marks and some flash, but nothing to lose any sleep over. I am very pleased with my Falklands Harrier GR.3; it’s proudly displayed next to my Airfix Sea Harrier FR.1, also from the Hermes Air Group during the Falklands Campaign. I have included photos of the GR.3 next to the Sea Harrier for comparison. I recommend this Harrier to modelers of all skill levels; its clever engineering and ease of assembly make this a very satisfying project.

I would like to thank Hornby America, and the IPMS/USA Reviewers’ Corps for the opportunity to build and review the Harrier GR.3.

Harrier GR.3 and Sea Harrier FR.1 - Side View
Previous Next