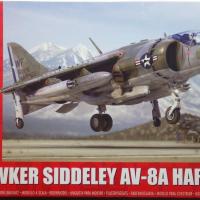 Following its successful introduction into service with the Royal Airforce, the Harrier generated considerable interest for export orders to other countries. The largest demand for the vertical take-off and landing aircraft came from the United States Marine Corps, who saw the excellent potential to provide close air support while operating from the decks of the smaller amphibious landing ships supporting the Marines. Starting in the early 1970s, the Harrier entered service with the USMC. The AV-8A Harrier was used by the Marines until 1979, when it was replaced by the AV-8C, and today the USMC flies the AV-8B Harrier II.

Airfix’s 1/72 Hawker Siddeley AV-8A Harrier is the third boxing of Airfix’s new tooling of the Hawker Siddeley Harrier. This time, it includes new parts to represent the AV-8A and provides decal options for two aircraft. A USMC Harrier from VMA-513, which was based at Misawa Air Base in Japan in 1976, and an AV-8S Matador, operated by the Spanish Navy in the early 80s.

The kit comes in the familiar soft light grey plastic common to Airfix’s recent “new tool” offerings. The sprues provide very nicely detailed panel lines, with some very minimal flash. There were also a couple small sink marks that had to be taken care of upon assembly. The clear parts are provided in a separate plastic bag keeping them free from scratches.

Construction starts, as usual, in the cockpit. Airfix provides a nicely detailed cockpit tub, with a decal for the instrument panel, and multi-part ejection seat. The kit provides a pilot, but if you don’t want to include the pilot, there are no seat belt details included on the seat or with a decal, so you’ll either need to add some scratch-built belts, aftermarket PE, or just leave them off all together. Once assembled, the cockpit fits into the fuselage, and prior to sealing it up, you’ll need to add the large engine fan directly behind the cockpit. The engine fan is fairly visible through the large engine intakes on either side of the cockpit, but it is nicely detailed and fits well.

The wings, built from three main parts, fit over the top of the fuselage. The instructions provide a choice of in-flight or static poses. However, for an inflight model, you’ll need to purchase, or a make a stand separately. The fit over the top of the fuselage with the wings, creates a small step down. This will need to be addressed by adding just a little styrene between the wings and fuselage to get it lined up correctly.