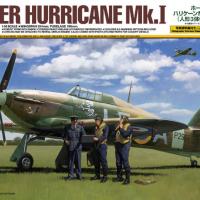 Conceived in 1934 to fulfill a requirement for a monoplane interceptor with a top speed exceeding 300 miles per hour in level flight, the Hawker Hurricane became one of the most significant Allied fighter aircraft in the opening years of the Second World War, and served worldwide throughout the conflict with great distinction. Most famously known for its pivotal role in the Battle of Britain, the Mk I variant of the Hurricane served as the numerical mainstay for the Royal Air Force in its defeat of the Luftwaffe during England’s “Finest Hour.”

Tamiya’s recent release of the Hurricane Mk I is a repackaging of the new Italeri kit. Although a nice kit, it is not thoroughbred Tamiya, so modelers should temper their “shake the box and out pops a great build” expectations a bit before diving in.

The kit is molded in soft light grey styrene with a combination of raised and recessed detail. Consistency of detail crispness varies throughout the model, but overall is good and appears accurate when checked against available references. A fret of photoetch with seat belts and instrument bezels is included. Decals by Cartograf are included for 4 Battle of Britain Hurricanes and also for a Malta-based Mk I. Tamiya tosses in an additional sheet of markings for a Finnish Air Force Hurricane, circa 1943. Standard to both the Tamiya and Italeri versions is a nifty little 36-page color reference booklet, similar to those found in Tamiya’s 1/32 scale Spitfires and Mustang. And, for good measure, Tamiya tosses in their sprue of 3 RAF flying officers.

For some reason, still unbeknownst to the reviewer, our esteemed Reviewer Corps Commandant elected to send along a slew of aftermarket details to be incorporated into this build, so the ride shown here has been “pimped” to some degree. The magnitude of the aftermarket notably extended build time and complexity, but was indeed appreciated.

Each of the aftermarket items will be showcased in its own review, but here’s the short list of what’s included in the photos you will see here:

Assembly led off with the cockpit, which was nicely done in the stock kit. The tubular cockpit structure was well executed and fun to assemble, since it’s something not often encountered during a build. The kit’s instrument panel “sandwich” including decal instrument faces and PE bezel appeared to be very well executed, but I was obligated to use the Eduard SA set for this build – which, as always, made the cockpit really pop with detail and color. The kit seat is a bit clunky, especially when viewed from the open access door, so the Eduard seat was a welcome addition. The kit PE harness is nicely done, but I used the Eduard pre-painted SA’s – “sweet” as always. All said though, the kit cockpit can hold its own in out-of-box competition.

Next up was the Merlin II. Once built-up, painted, and weathered, the engine adds a nice touch, but I had my doubts during assembly. Fit was a bit rough, and one piece was short-shot – but fortunately not noticeable in the finished product. The Quickboost exhausts saved about 30 minutes of clean-up and drilling out the ports, but the kit parts are adequate.

Wing assembly features positionable ailerons, which I chose to cement in the neutral position since I couldn’t find a single reference photo with the ailerons deflected while the plane was parked. Insertion of the main gear well took a bit of trimming and sanding to fit correctly, and the wing seam required several touches of putty and some scraping and sanding to achieve the desired effect. Incorporated in this build were the Eduard landing flaps, which added some visual interest to the trailing edges, although most reference photos show the flaps retracted when the aircraft is parked. The most notable glitches with wing assembly were the leading-edge inserts for the gun ports and landing lights. Although the openings appeared properly aligned, the port and lens inserts just fit poorly, requiring a bit of filling, sanding, and blending.

Integration of the wing to the fuselage required some putty in and around the leading edge fillets, and required careful sanding to maintain the proper contour. Rudder and elevators are positionable and fit well to the stabilizer areas. I chose to pose them as seen in many of the reference photos – rudder slight right deflection and elevators slightly drooping. The only really disappointing aspect of the fuselage fit was around the engine top at left side covers. The engine top cover has too much tolerance between it and the fuselage, and the fit of the left cover is not snug enough to hold the panel in place when the finished model is repositioned.

Landing gear details were largely replaced by SAC struts and Eduard PE, although the kit detail is well-executed and adequate for an out-of-box build. The SAC main struts and braces are simply white metal knock-offs of the kit parts, but provide welcome strength to otherwise fragile and spindly gear. The SAC tail wheel strut is a bit bulky, and I will probably revert to the kit strut before taking the model to a show.

Canopy and windscreen are very nicely done and fit very well. The Eduard masks were most welcome on the birdcage canopy and multi-panel windscreen. The prop parts went together well, with blades keyed to the hub to ensure proper alignment without a special tool, but there was a bit of gap between the prop spinner plate and the fuselage when the prop was press-fit onto the driveshaft.

After a coat of Tamiya Fine White Primer, the Dark Earth/Dark Green/Sky color scheme for the 151 “Eagle” Squadron aircraft flown by Pilot Officer J. Havilland in October, 1940, was applied. Italeri Acrylic Dark Earth and Dark Green lay down perfectly on the topside, and Polly Scale Sky Type S was finessed onto the belly. Water-thinned Minwax Acrylic Clear Gloss was airbrushed to provide a smooth decal base. The Cartograf decals snuggled down perfectly with minimal setting solution, and were one of the biggest highlights of the build. Decals were sealed with the thinned Minwax Acrylic, and an oil wash was applied to bring out panel detail. A 50/50 blend of Future and Model Master Acryl flat was then airbrushed to seal the wash and knock down the sheen. Exhaust and foot traffic stains were drybrushed with pastel artist chalks and sealed with the Future/Acryl Flat mix. Paint chipping was simulated with a silver colored pencil.

Finally, after many, many hours, the project was completed with a great deal of satisfaction, and a long-desired Eagle Squadron Hurricane parked next to Capt. Gentile’s Spitfire in the display case.

I recommend the stock kit to any modeler with a little experience working through basic fit problems and willing to undertake a little bit of PE work in the cockpit area.

Thanks to Tamiya USA and IMPS/USA for the sample kit and the opportunity to provide this review.

Seat and IP on sprue

Belly with Eduard flaps
Previous Next