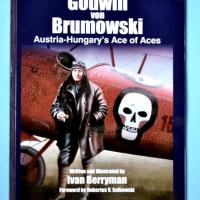 The name Hauptmann Godwin von Brumowski may not immediately register with model builders, but those who build WWI aircraft models probably have given his bright red Albatros a second look when considering a vivid scheme while building a model of that aircraft.

Like Germany’s ‘Red Baron’, Austria-Hungary’s ‘Ace of Aces’ flew a red painted fighter. But, ironically he had much more in common with his world famous contemporary, Manfred von Richthofen than the color of their aircraft. Brumowski's career followed a course that was quite similar to that of the more widely known 'Red Baron'. Born into a military family, he was educated at cadet school and commissioned into the artillery while Richthofen was still in the cavalry. His early adult life was spent in the army, much of it in war service. And, like Richthofen, he first served on his country's Eastern Front, transferred to the air service, started to attract attention as a successful observer/gunner and eventually excelled as a fighter pilot.

After training as a pilot, Brumowski gained experience on the Russian Front before being posted to the Isonzo Front in Italy, where his skill continued to impress his superiors, and he eventually was made commander of Flik 47J (fighter squadron) and later was posted to the Western Front to study Richthofen's methods. On his return from Germany, his example, leadership and practical abilities helped to galvanize the Austro-Hungarian Luftfahrtruppen as his successes accumulated. Brumowski became the most successful fighter ace of the Austro-Hungarian Air Force during the Great War. He was officially credited with 35 air victories, (including 12 shared with other pilots) and 8 unconfirmed kills because they fell behind Allied lines. Before the war ended, von Brumowski rose to command of all Austria-Hungary fighter squadrons fighting Italy on the Isonzo front.

Unlike Richthofen, Brumowski survived the war. But sadly, his post-war life followed the sort of unhappy pattern all too common among those who had known only military service and war, and ended in 1936 in the crash of a civil aircraft flown by a student pilot.

This book, chronicling Brumowski’s story, was inspired by a man’s search for the story of his famous grandfather’s achievements in WWI and evolved into a fitting tribute to Austria-Hungary’s ‘Ace of Aces’. After purchasing one of artist Ivan Berryman’s aviation prints depicting one of Brumowski’s aerial victories, a friendship developed between the artist and the grandson, Hubertus V. Sulkowski, that eventually lead to an agreement to collaborate on this book. The result is a most interesting read and a valuable addition to the many manuscripts that are being published during this first year of the WWI Centenary.

Following a two-page dedication by grandson Sulkowski and an introduction, author Berryman tells the story in seven chapters and illustrates the story with 17 full color reproductions of his paintings plus fifty b/w photos, including some rare family pictures, and photos of treasured items preserved by Brumowski's descendants. There are no three-view plans typical of aviation reference books because this is not a reference book devoted to any type of aircraft. The paintings and period photographs included do provide valuable information about the various aircraft Brumowski flew, but this book is a valuable reference for anyone interested in learning the story of the most significant Ace flying for the Austria-Hungarian Empire in WWI.

Cross & Cockade International is the publisher of this work and they features this book on their website. This is a very good book…one that deserves a place on the bookshelf of any WWI aviation buff. It is highly recommended to those with a serious interest in WWI aviation or anyone who would like to learn more about the subject. My thanks to The First World War Aviation Historical Society for providing the sample for review and IPMS/USA for the opportunity to review it.