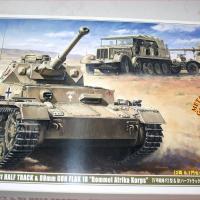 You get three 1/72 scale kits and a 54 mm figure in one box here. The kits are an 8-ton halftrack, (SdKfz 7) an 88 mm FLAK 18, and a Panzer IV ausf F2. The figure is Field Marshal Erwin Rommel. There are individual instructions for the vehicles, and the painting and assembly instructions for Rommel are included with the 88 mm FLAK.

I built the kits and figure individually and will go through the process of construction and finishing one at a time.

The Hasegawa 88 mm gun can be displayed either on the travel wheels or deployed for action. Since this came with the halftrack, I decided to build it in “road mode”. The wheel assemblies can be removed, and the side stabilizers can be deployed if desired, as these parts are not glued but can be reset for an “action” display.

Assembly: There are a bunch of little parts, but if you follow the instructions, everything goes together well. There is some flash on the smaller parts, but this was easily removed, and everything fit OK. The assembly sequence starts with the front wheels, axle and fenders, then the rear wheels and fenders, with all of the extra equipment like winches, levers, and seats. The gun barrel is then put together. Don’t make the mistake I did and leave off a part before mounting the barrel in the gun mounts. Fortunately, I caught this before the cement set, and I was able to fix this without visible damage. The base is then assembled, the barrel is mounted, and it’s ready to have the front and rear wheels clicked into place, without cement.

The Hasegawa Sd Kfz 7 kit was first released in 1973. It has the “rubber band” tracks which were state of the art at that time. The mold has been well kept, and while there is minor flash here and there, there were no fit or assembly problems caused by the flash. Most of the flash was removed by a quick swipe of my thumbnail. Sometimes the old methods still work best.

Assemblywas fairly easy, although there were a lot of parts which had to be cut off the sprue and then detail painted. The wheels for the tracks, the front wheels and the seats in the interior all had to be painted individually.

The halftrack is assembled as the running gear and wheels, then the upper chassis and seats is added. The track wheels were interesting because you put 3 wheels on each side, let’s call them A. Then 4 sets of wheels, B and C are put on over the As, and they overlap. Then 4 D wheels are put on, connecting to the A’s and partially covering the B and C wheels. There are also drive sprockets at the front and two truck type tires as steering gear. The tracks are then installed. These are one-piece assemblies, often called “rubber band” tracks. They are able to stretch enough to go on the wheels without damaging the running gear.

Once all the wheels and tracks are on, the upper chassis is assembled, consisting of a base, and then attaching the hood and windshield, the steering wheel, the driver’s seat, and the passenger seats. There are side and rear parts for the passenger compartment, and then a flat “table” is installed behind the seats.

The lower and upper assemblies are then joined. At this point you can decide if you want the top up or down. There are parts for either a folded or deployed top. I decided that the desert needed a top for a sunshade.

The tank had an interesting sprue. Included were parts for the ammunition carrier for the Karl mortar. It also includes the 54 mm shells for the Karl. Not used in this build, but I’ve done two of these for reviews.

The first assembly was the gun and mount. I had some trouble with this step because the gun mount and the fulcrum are glued together through the mantlet, but not glued to the mantlet. I had trouble getting enough glue in there to hold the parts together without gluing them to the mantlet. CA was my friend here. The turret assembly is then finished, with the hatches, bottom and bustle all attached.

The wheels and suspension went together well. The assemblies are rather like what was used on the M-4 Sherman, so it wasn’t difficult go get right. Once these were done, the suspension assemblies were glued to the hull bottom. I suggest that the tracks be put on before the hull top is glued on, as it makes it a lot simpler. This is the voice of experience speaking here.

Once the hull is assembled, there are some more detail parts to be added to the exterior, and the turret is rotated into place. I had a VERY tight fit with the turret, to the point of being afraid to rotate it for fear of breaking off some exterior parts.

There weren’t too many decals on these vehicles, but the decals provided were very good. I had no problem getting them off the backing paper, and they held up very well to handling and positioning. The instructions were very good on placement.

There isn’t a lot of assembly to this figure. The body is one part, the head is separate, the binoculars and goggles are added after the head and body are painted.

The body is pretty simple, as Rommel is depicted wearing a leather overcoat, which is semi-gloss black. The boots are glossy black. That’s the simple part.

I did the face by painting the entire facial area flesh, then putting acrylic white in the area of the eyes. I put in small dots for pupils, then used a medium brown to reduce the size of the eyes and simulate eyelashes and the slightly sunken areas around the eyes. The brown areas were then reduced to thin lines using flesh color. The hair was done in a light gray. Field marshals aren’t kids. The hat and shirt were done in feldgrau, with white epaulets and collar tabs, with red centers. There are two gold buttons on the back of the belt on the coat. The goggles were painted silver and attached to the hat. The binoculars were painted gloss black and attached to the front of the coat.

Recommended. The vehicle kits are all from the 1970s, but the molds have been well kept. There have been some advances in mold making and detailing since these came out, but they are still buildable kits that are not difficult and come out looking pretty good. Rommel was originally packaged with a 1/32 FieselerStorch back in 2010.

I’m quite happy with how this project came out.

Many thanks to Hasegawa and Hasegawa USA for the review kit(s), and to IPMS USA for the chance to build something outside my usual area of interest.