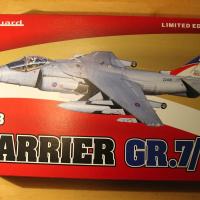 The British Aerospace Harrier II was a second-generation vertical/short takeoff and landing (V/STOL) jet aircraft used previously by the Royal Air Force (RAF) and, between 2006 and 2010, the Royal Navy (RN). The aircraft was the latest development of the Harrier Jump Jet family, and was derived from the McDonnell Douglas AV-8B Harrier II. Initial deliveries of the Harrier II were designated in service as Harrier GR5; subsequently upgraded airframes were redesignated accordingly as GR7 and GR9.

Under the Joint Force Harrier organization, both the RAF and RN operated the Harrier II, including routine operational deployments on board the navy's Invincible class aircraft carriers. The Harrier II participated in numerous conflicts, making significant contributions in combat theatres such as Kosovo, Iraq, and Afghanistan. The type's main function was as a platform for air interdiction and close air support missions; the Harrier II was also used for presence projection and reconnaissance duties. The Harrier II served alongside the Sea Harrier in Joint Force Harrier.

In December 2010, budgetary pressures led to the early retirement of all Harrier IIs from service, at which point it was the last of the Harrier derivatives remaining in British service. The decision to retire was controversial as there was no immediate fixed-wing replacement in its role or fixed-wing carrier-capable aircraft left in service. In the long term the Harrier II is to be replaced by the Lockheed Martin F-35 Lightning II.

Eduard, a Czech Republic maker of scale model kits and accessories, produces the kit. The kit uses the Hasegawa Harrier GR 7/9 plastic parts, but Eduard provides photo-etched accessories, painting mask, Brassin wheels and seat, and Cartograf decals for 6 marking options. The kit arrives in a very colorful box with artwork of a Harrier GR.7/9 on the box. The box sides show the six decal options.

The kit consists of over 200 parts not counting the Brassin Resin wheels and landing gear, ejection seat, COLORED cockpit photoetched detail parts, and photoetched airframe detail parts. The kit comes on 14 grey sprues, and 2 clear sprues for the canopy. There are 2 grey sprues for the weapons alone. There are 2 photoetch sprues for the cockpit and airframe detail parts. The colored cockpit photoetched detail parts are really nice. The parts are nicely molded, with no flash, fine panel lines, and small sprue gates. The 16-page instruction sheet show the suggested assembly through 26 steps starting with the cockpit assembly and progressing through fuselage, assembly of wings and tail planes, to fuselage, and final parts assembly. As part of the 16 pages there is one page of weapons assembly shown in 2 steps for the weapons options. This kit has limited weapons load options.

Next the wings and fuselage top half are assembled and attached. Next the vertical fin and elevators are assembled and attached to the fuselage. The landing gear and weapons were constructed and added. Last are the construction of the ejection seat and canopy. The ejection seat by itself is a nice kit once you add all the photoetched detail parts and decals. The canopy is constructed second to last and has nice photoetched detail parts.

There are very nice painting and marking guides provided for both the six paint scheme/decal options and the limited weapon options. I chose to do option A, Harrier GR.9 ZD 406, Royal Navy Naval Strike Wing, RAF Station Cottesmore, 2009. The paint guides give the color specifications for Aqueous and Mr. Color paints. I choose to use the corresponding Model Master, and Tamiya paints.

I then used a dark wash and chalk pastels to highlight the fine detail of the panel lines in the fuselage, wing, rudder, and elevator.

There are 6 decal options that are shown on the painting and marking guide for these Harrier aircraft. But all decal options are for either RAF or RN aircraft. The guide shows a layout of the options with the aircraft in left, right, and top giving locations of the decals. There is also a page showing the aircraft in left, right, and top giving the locations of the stencils. There are also details showing the stencil locations on the weapons and hard points. The decal sheet is nicely printed, thin, was printed within register, and I had no silvering problems.

Overall the kit is a joy to build (except for the nose/fuselage mating problem) and builds into a nice Harrier GR 7/9 aircraft. The fine panel lines and the detail are exceptional for a kit of this scale. The colored photoetched detail parts really set off this aircraft. The only thing I would change would be to use Eduard Super Fabric seat belts (if available) instead of the photoetched provided with the kit.

My thanks to Eduard and IPMS USA for the opportunity to build this kit. I look forward to building more Eduard kits in the future.