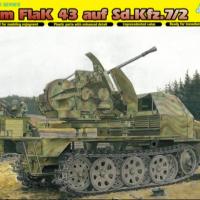 This kit represents a Sd Kfz 7/2 Halftrack to mount the 3.7cm Flak 43 in the bed. The AA gun basically was just picked up and placed in the bed of the truck. The truck bed was slightly modified to add mounting points and for the sides to be lowered into a fighting condition. This gave the crew more space to maneuver the gun as it was firing. These sides did not provide any protection for the crew. The halftrack has an armored cab and armored radiator shield.

There are Magic Tracks for the tracks and if you are careful they will moveable and will allow for a good representation of the track sag. There is one sprue of clear plastic, one small fret of photo etched parts and one large fret of Photo etched parts that make up the Flak gun shield. Be warned, there are no plastic equivalent parts for the gun shield.

This will build into a nice model if you are patient and have good photo etch skills. This is a kit for intermediate to advanced builders. If you have some skill with the photo etch and some experience with soldering, this will still be a challenge build for you. However, once it is done you will have a very eye catching model.

I can recommend this to the German Halftrack builders and general WWII fans with the above caveat.