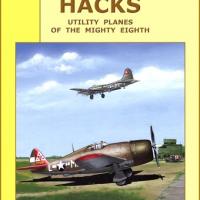 Mention “hack” in today’s society and most people think of something to do with computers. Mention the same word to aircraft modelers and we think of utility aircraft such as Norsemans, Bobcats, Piper Cubs, etc.

”Hacks” is the story of those aircraft used by the Bases and Groups of the Eight Air Force in England during WWII. The book has a soft cover with the complete text in English and consists of 132 pages, 267 photos and 195 color profiles. Besides the more common utility type of aircraft, hacks included War Weary Thunderbolts and Mustangs, Bostons and Forts and many other types. These are details with at least one picture, a profile and a little bit of data.

The book starts out with a numerical listing of the USAAF stations in the United Kingdom between 1942 and 1945. There are 360 bases listed.

The book then has one page of text which explains the topic in general and lets you know that this was originally meant as a supplement to the author's previous book titled Assembly Ships of the Mighty Eighth. The next 14 pages feature new pictures and profiles about those aircraft. Some of the information corrects information from the original book.

Next up are 11 pages of alphabetical listings of the USAAF Stations with notes about what groups were stationed at each and when they were there. Then there is a chart for each Wing listing the hacks used by Flight and/or Group. The chart includes the aircraft type, serial number and codes if known. Finally, pictures and profiles are included for some of the aircraft of that Wing.

Modelers, especially those who love the Eighth, or who love something different than the regular fighters and bombers will have a field day with this book. Many B-17s were used as hacks after their bombing careers were over and it was interesting to see several survivors of the first heavy bomber mission flown over Rouen on August 17th, 1942. P-47s were a favorite and look very different with Bomb Wing markings on their tails. P-51s were also pressed into service, and there are a bunch of two seat options throughout; including one bright yellow bird that belonged to the 479th Fighter Group. I was surprised to see the number of profiles for Bostons. The Matchbox Norseman could be done in several different and colorful markings. There are also more than a few British aircraft shown.

Captured aircraft were used, especially towards the end of the conflict. One of the more colorful planes is a He-111 H-23 used by senior officers of the 56th Fighter Group. This plane is in overall black with red codes.

The cost may seem a little high but the information shown can lead to many hours of modeling enjoyment making the cost well worth it. Now, I must save my pennies for the Assembly Ship book.