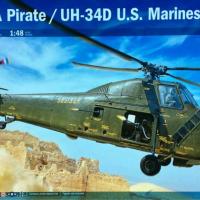 Back in 2012, Italeri released their first Wessex UH.5 in 1/48 scale in what would become a long line of Wessex types and UH-34 variants. This particular boxing is the second UH-34 version, with new parts and decals for a pair of French gunships, a West German utility chopper, and a Vietnam based U.S. Marine Corps bird. With those options, the included new weapons parts tree will provide plenty of useful leftovers no matter which version you choose to build. The extensive decal sheet, printed by Cartograf, uses a very thin carrier film with virtually no carry over beyond the printed image. Even the smallest stencils are perfectly legible. The kit parts, molded in dark olive green, are generally crisp and cleanly molded with no flash or visible ejector pin marks. Only in a few places were there any gaps requiring filler or shims.

The cockpit and cabin are well fitted out. The flight deck includes a PE instrument console with an accompanying decal for the dials and gages. The pilot and co-pilot seats are adequate and the PE belts and harness on the kit’s PE fret look very convincing when attached. The kit includes both a stick and collective for each position, with foot pedals attached under the instrument panel. There’s an overhead instrument console that attaches to the inside of the upper canopy, however, I found it to be too long. When attached as indicated (and that’s not clearly shown in the instructions, a recurring issue throughout the build), its about 1/16 inch too long and blocks the canopy from fitting along the back edge. I ended up cutting away about that much of the console block to allow for a good canopy fit. The crew/passenger cabin is also well detailed, particularly the deck, overhead and front and rear bulkhead. The kit includes two rows of canvas seats with strapped backs, port and starboard. I chose to divide the longer, port side row, removing a middle seat to open a place for a M-60 machine gun at the window. The leftover seat was modified and used as the starboard side gunner’s seat. The weapons tree gives you a 20mm cannon with shield, one .30 caliber and three .50 caliber machine guns as well as two M-60 guns along with associated mounts.

Unlike the Gallery kit, there is no option for a folded tail, nor is there an engine to display with opened engine access doors. But because of the multi-national variations, the kit offers three nose options with accompanying PE for each. The instructions would have you assemble the nose compartment separately, then attach it to the assembled fuselage. I chose to attach the respective nose halves to the fuselage half, then assemble each complete fuselage half. Doing this while trying to include the interior cabin and cockpit parts was another of those situations where three hands are better than two, but none of the required fiddling was insurmountable. The fuselage fit is generally good, but there are a few places where gaps occur, some too wide for filler alone. Both the bottom of the fuselage as well as the screen panel around the rotor were inserts requiring filler or shims or both. For the rotor screen, the kit offers either a PE or a plastic frame with a plastic screen mesh that must be cut out to fit. Unfortunately, the PE screen will not fit without being cut and modified, so I went the screen mesh route.

With the fuselage assembled, the final phase includes attaching the wheels, assembling the rotors/blades and attaching the various small exterior parts. The landing gear struts are very thin at the axel, and they support the weight of the model. After attaching them to the fuselage, I quickly broke one with a very slight application of pressure to the fuselage. I broke it again when attaching the wheel (admittedly a tight fit). Use extra care around them. The main rotor blades are molded with a slight droop, but it’s not uniform. A hot soaking and massage helped even out the droop. The tail anti-collision light was replaced with a small piece of smoothed red toothbrush. Attaching the tail rotor, as well as many of the small exterior parts often requires repeated trips to the reference library to see just how and where these parts attach, as the instructions many times show only vague approximations of locations (i.e. the pitot is shown sticking out from the middle one of the glass cockpit panels. It should be from the frame). Many of the small parts are only butt-joined to the fuselage, with no positive attachment point indicated. I ended up drilling small holes in the fuselage to insure a more secure fit.

For a long time I had wanted to model an HMM-163 “Evil Eyes” Vietnam H-34, so I had purchased the Caracal sheet years ago and used the eyes and some numerals here. However, most of the markings come from the extensive kit sheet and they were a pleasure to work with. This aircraft spent a lot of time in the field, so its original markings were modified by painting over the port and starboard national insignia as well as many of the safety markings. I faded the paint with a 1:4 ratio of OD to Marine Green (FS34102) and dusted it heavily. Blade wear was done with a silver Prismacolor pencil rubbed down to dull the sheen.

While by no means a shake-and-bake kit, this is a good effort on Italeri’s part. It offers a less complicated (if less detailed) option to the Gallery (now Trumpeter) H-34 with more international options. The extensive weapons tree is a big plus, and the kit decals are excellent. Use care and a little skepticism when following the instructions, and an experienced modeler should have no trouble overcoming this kit’s quirks. My thanks to MRC/Italeri and to IPMS for providing this kit for review.