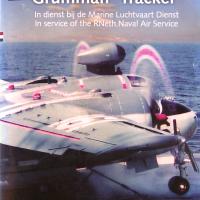 Having recently acquired one of the Kinetic 1/48 Grumman S-2 Tracker kits, I was intrigued when I saw this book and the corresponding decal sheet offered for review. I was previously unaware that the Royal Netherlands Naval Air Service, or Marineluchtvaartdienst (MLD), had used the Stoof. This excellent 52-page publication combines dozens of photographs along with text in both Dutch and English to tell the history of the S-2 in the MLD.

The first half of the book contains the Dutch text and the second half contains the English. The English translation is very well done. There were none of the awkward translations that you sometimes find in publications that have been converted into English from another language. The pictures scattered throughout the book each have Dutch and English captions. There is a 50/50 mix of color and black & white pictures, and most of them are large and clear. There are also two pages of walkaround-style photographs, but unfortunately there are no cockpit shots. A table at the end of the book lists all of the Trackers that were used by the MLD and their eventual fate.

The Stoof replaced another Grumman design, the Avenger, in the Dutch Navy’s ASW role in 1960. Twenty-eight Trackers were received from the U.S., while a further seventeen CS-2s were supplied by Canada. The CS-2s served solely in the Dutch Antilles until 1974. The aircraft was well-liked by the pilots who flew it and the crews who serviced it. There are a couple of accounts in the book of cases where the robust Tracker brought its crew home safely, sometimes in spite of their best (or worst) efforts. The service of the Stoof seemed to mirror that of the aircraft carrier that two of the groups served on, the HNLMS Karel Doorman. When the carrier was decommissioned in 1968, it seemed to mark the beginning of the end for the Stoof. A couple of modernization efforts extended the life of the Stoofs for a few years, but by the mid-1970s they were withdrawn from the service of the MLD. Eight of the Trackers were sold to Turkey, and a handful found their way into museums, but most of them were either scrapped or written off.

There are five pages of color profiles depicting eight different Trackers. One of the profiles is of a colorful aircraft operated by KLM Airlines for training purposes in the early 1970s. The profiles give the colors by name and also by their corresponding FS and BS numbers. There are a few nice detail shots of the wingfold mechanism throughout the book, which are great for someone like me who wants to finish his model with the wings folded. Another thing that I observed is the complex arrangement of the antenna wires on the rear section of the aircraft. The Kinetic kit instructions do not make any mention of these wires, so I will definitely need to reference the pictures in this book for placement.

Another plus of this book is the price, which is quite reasonable. I feel that it is a great value for the money. All in all, this is a terrific book that will be of interest to anyone who likes the Stoof, and who doesn’t? If you are planning on obtaining the Dutch Decal sheet, I would highly recommend that you also purchase this title. I would like to thank Dutch Decals sample and IPMS/USA for the opportunity to review this fine publication.