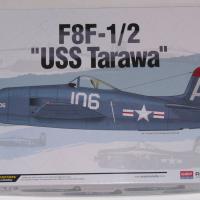 Inside the box you will find 9 sprues of various sizes lettered A-I (8 light grey and 1 clear injected plastic), a decal sheet, an 8 page instruction fold out and an extra 4 page foldout with more marking options. The plastic is very nice with engraved and raised detail but there is a little flash, not too much though (This kit is from the 90s so I wasn’t surprised at this). The decal sheet is very nice, in register and has markings for 6 different aircraft.

10 steps are needed to construct this kit and it starts with the cockpit, fuselage and engine. Steps 1-3 cover this and since there is not a whole lot of detail in this kit only 17 pieces make up this area. I decided to use the Eduard Zoom set (FE301) to spruce the cockpit up a little and it did just that. Steps 4 & 5 are for the wings and it’s pretty simple but make sure you drill out the holes for the pylons. Next up is the wing to fuselage assembly, horizontal stabilizers, engine to fuselage and everything fit perfect.

Step 7 is where you add the tail and cowling and you are given 2 options for each and I chose to do the -2 version. Next are the landing gear which is pretty basic & easy to assemble and the pylons. (Did you remember to drill the holes?) Step 9 is where you add the canopy and exhaust ports and is the only place I had any trouble. For whatever the reason I just could not pose the canopy open so closed it is. The final step is the addition of the ordinance and external fuel tanks. I chose a centerline tank and no bombs or rockets because to me this is a fighter plane and they just ruin the look for me.

I used Tamiya XF-17 (Sea Blue) to finish this and after a couple coats of Future the decals went on without a hitch with just a little Micro-Sol to help. You get markings for six different aircraft all of which are in beautiful Gloss Sea Blue (Is there anything better?) and they are as follows:

There are some accuracy issues and it’s not the most detailed kit but all that can be fixed if you wish. In my humble opinion this is a very nice kit that builds easy and I recommend this kit for all modelers.

I would like to thank MRC Academy for this kit, the review corps for letting me build it and all of you for reading this...NOW GET BACK TO THE WORKBENCH!