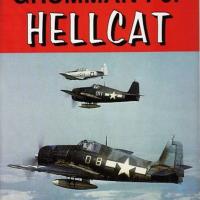 Among World War II naval aircraft, the Grumman F6F Hellcat fighter achieved a record that remains unsurpassed: 5,156 enemy aircraft downed, and in less than two years of combat operations at that! Clearly, it was the right plane in the right place at the right time. Meyer and Ginter’s new book provides a little something for everyone with an interest in the Hellcat, no matter what the angle. The book begins on the very first page with Mr. LeRoy Grumman’s design philosophy, which sets the tone for all that follows: “Grumman will only build an easily produced, maintained and reliable combat aircraft that can be readily mastered by a 200-hour, war-time pilot trained to fly from a carrier, engage in successful combat, sustain combat damage, return to the carrier and land his aircraft after dark so that he can be available for combat again the next day.”

The book unfolds in a series of sections, starting with the F6F’s developmental history, which began in February, 1938, when Grumman engineers looked to improve the performance of the XF4F Wildcat, thus discounting the notion that the Hellcat was developed specifically to counter the Japanese Zero. The XF6F first flew on August 8, 1942, and the production version, the F6F-3, flew on October 3, 1942. There was obviously much heated competition between the Grumman XF6F and Vought’s XF4U, given the text and pictures devoted to comparing and contrasting these two aircraft. The subsequent flight testing of the Hellcat is largely told in terms of the first-hand experiences — several near-death — of one of the authors (i.e., “Corky” Meyer), who was a Grumman test pilot. Interesting vignettes dot this section specifically to include Meyer’s introduction to the phenomenon of compressibility.

The book then transitions to a comprehensive review of F6F production variants. This review is accompanied by diagrams and close up pictures of cockpit details and instrument panels as well as particular aspects of specific variants’ distinguishing equipment (e.g., radar installation, etc). Attention is even paid to drop tanks and the wing folding mechanism, the latter being a significant feature in terms of effectively doubling the capacity of aircraft carrier (CV) elevators. The following section provides one of the best descriptions of the evolution of U.S. Navy markings — as they applied to the F6F — that I have seen to date. Great information, as derived from Hellcat wreck recoveries and restorations, is also provided on paint colors, both exterior and interior, with the latter not being limited to just the cockpit!

Subsequent sections provide a running historical combat narrative, starting with the F6F-3s assigned to VF-9, which first entered squadron service on January 16, 1943, and drew first blood on August 31, 1943, over Marcus Island. Rapid transition of Hellcats to all CVs in the Pacific theater soon followed, and Hellcats were the dominant naval fighter during the largest one-day air battle of all time, the “Great Marianas Turkey Shoot.” Hellcat squadrons claimed 354 kills on June 19, 1944, with only 16 losses of their own. By the time the Japanese surrendered, the Hellcat had the highest kill ratio (19-to-1) and the greatest number of aces (307) of any aircraft in the Pacific theater.

Besides Pacific operations, the authors also provide coverage of Marine, British, French, and European actions — the picture of the F6F-5 with 4 German kill markings (attributed to two different pilots) really caught my eye as a unique modeling subject! The authors close with a series of small sections on training command, post war, reserve, and drone Hellcats. The final two pages of the book address “Hellcat Prey.” Overall, a pretty comprehensive history!

In summary, what is not to like about this book? Every page has at least one picture or illustration (usually more), meaning the book has several hundred pictures in total. Many of these pictures show Hellcats in action, making the book ripe both with material for superdetailers and ideas for dioramas. At times, it seems that every other page has pictures of Hellcat crashes, fires, or dismemberment, but in a remarkable number of instances with the pilot walking away — a testament to the “Grumman Iron Works.” Of note, this book does not have the customary section at the end reviewing model kits of the subject aircraft as is typical of this book series. Nonetheless, I highly recommend this book, and I would like to thank IPMS/USA and Ginter Books for the opportunity to review this book. Now I just need to move that 1/32 scale Trumpeter F6F-3N to the top of my “to build” pile!