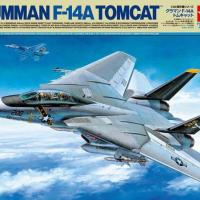 Introduced in the 1970's as the U.S.Navy's replacement for the F-4 Phantom in its fleet defense fighter role, the F-14 Tomcat quickly established itself as a state-of-the-art weapons system and as one of the world's leading air superiority fighters. The Tomcat saw significant combat duty, starting with the downing of a pair of hostile Libyan Su-22's in the early 1980's, and concluding during the Global War on Terror in 2006 when it was replaced by the F/A-18E/F Super Hornet.

Throughout its distinguished service life, the F-14 expanded its role to include air-to-ground bombing, and fielded variants with designations of F-14A, F-14A Plus, F-14B, and F-14D – all derived from engine, avionics, and mission capability enhancements.

What is there to say? Tamiya design and tooling of the legendary Tomcat in 1/48 scale – pure modeling heaven! To elaborate, plastic is crisply molded in light gray and clear styrene. Polycups are included for mounting stabilators. The decals for 3 markings options are printed crisply and in register, with excellent color fidelity. A full complement of air-to-ordnance is included, featuring AIM-7 Sparrow, AIM-9 Sidewinder, and AGM-54 Phoenix missiles. Afterburner nozzle parts are supplied for open and closed position options. Similarly, interchangeable parts are included to pose the wings in extended and swept configurations. Other features include optional position in-flight refueling probe and boarding ladder and steps.

As expected with a new Tamiya release, construction is all but flawless. Part fit is exceptional and requires minimal putty, allowing quick build of major subassemblies in preparation for paint. It should also be noted that design of wing, afterburner can and nozzle, landing gear, cockpit, vertical fin, and stabilator subassemblies are key design features with the modeler in mind, with each being a logical element for pre-painting.

Fidelity and accuracy of cockpit detail is exceptional. Upon comparison to F-14A cockpit photos in F-14 Tomcat in Detail and Scale, instrument and switch details are dead-on perfect. Multipart ejection seats also accurately mimic their full-size counterparts, and the decal rendering of the harness elements are surprisingly convincing in the context of the finished model. Canopy attach features allow quick and glue-free attachment of the canopy at proper attitude and alignment. The only disappointment in the office area is the longitudinal seam line on the main canopy, but it is easily removed with a fingernail nail buffing kit or similarly-graded micromesh sanding pads or sheets.

Landing gear detail, akin to that of the cockpit, is also well represented. All three struts and wheel sets are also thoughtfully engineered to maximize probability of proper alignment and stance of the finished aircraft, with secure and robust attach points to reduce likelihood of breaking during transportation and handling.

The wing attachment design is also well thought-out and very robust. The pivot mechanism is secured with a retainer and machine screws, and the wings slide over a rigid internal core mechanism. This “glove-over” design allows thorough painting of wing and adjacent fuselage areas prior to attachment of the wings.

Once all of the subassemblies were complete, they were primed with Tamiya gray primer straight from the rattle can. Preshading of panel lines followed using Vallejo Model Air NATO Black. Tamiya Gloss White was airbrushed to the underside of the aircraft, top and bottom of the stabilators, and the missiles, and Model Master Acryl Flat Gull Gray was applied to upper aircraft surfaces. Tamiya XF-18 Black was applied to vertical stabilizers and upper forward fuselage around the cockpit area.

Prior to decal application, two thin coats of Minwax Acrylic Gloss thinned 1:1 with distilled water were laid down to provide a smooth surface to prevent decal silvering. Decals were then applied using the Microscale system, and settled well into panel lines and around other surface detail. The decals behaved superbly.

Upon setting of the decals, another thin layer of the Minwax Acrylic Gloss mix was applied to seal the decals. As some of the era’s CAG F-14A’s in my research materials sported a gloss/semi-gloss finish overall, I chose to leave mine glossy. I also was very pleased with the subtle panel line effect left by the preshading, and chose not to apply oil washes to the panel lines.

Needless to say, the latest Tomcat from Tamiya is absolutely superb! Well-engineered parts, modeler-friendly subassemblies and construction sequence, and a keen attention to detail easily make this F-14A a “Must Have” for Tomcat and modern jet fans. Would I build another? “Any Time, Baby!”

Thanks to Tamiya USA for the sample kit and to IPMS/USA for the opportunity to share this review.