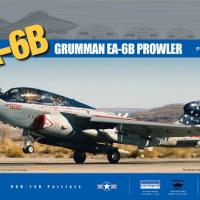 This being the second Kinetic kit I’ve had the pleasure to build and review, I have found several similarities in the offerings. First, the instructions could use some tweaking, in that I found some misnumbered parts. It would be of major benefit to the builder to keep his reference material close at hand. Secondly, during construction I encountered what I felt was a major fit issue with the wing to fuselage joints. My kit required completing the attachment in 4 steps with cyano acrylic and accelerator to close gaps in the wing roots (interestingly, I have since had an opportunity to read other build reviews of this subject and their experience didn’t seem as pronounced as mine. Maybe it was something I did wrong.) In any event, these two issues are the only negatives to an otherwise exceptionally nice kit. Third and last, this kit, like the F84F from Kinetic, suffers with extremely fat trailing edges, so get out the wood rasp.

The balance of the construction was quite straightforward with no other fit issues involved. While the kit parts are quite well done, I chose to use parts of the Verlinden set (seats, control stick, coaming, etc) originally done for the Revell/Monogram kit. Images show that these fit in well and offer a nice presentation with the excellent kit cockpit tub. The kit rear canopies are in 2 pieces each, so I opted to use the tinted ones from the Revell/Monogram kit and re-position the attachment “ears” on the rear of the canopies. Another aftermarket item I used was the Steel Beach intake covers designed for the Monogram kit, and the fit was near perfect.

As you can see, I prefer the wings folded which allowed the model to be painted, decaled and weathered prior to final assembly. When it came time to attach the wings, I found two things apparent. First, the attach itself is very frail. (I modified the “A” frames and added brass wire instead of the kit supplied plastic parts for strength. Also, I found it near impossible to attach things and keep everything aligned without a minimum of three hands, so when you get to that point, get one of your fellow modelers to assist.)

As far as nose weight is concerned, I added just a slight amount to be on the safe side, although I really don’t think it was necessary. Just as a point of interest, the wheel hubs came molded separately from the tires, which I thought I really didn’t care for, but I was wrong. Painting is much easier and the fit is great…I stand corrected! This kit contains many numerous small parts that care must be used so as to deter the carpet monster from devouring them (no wonder I prefer Braille scale!) All paints used were Model Master Enamels and the decals were Fighter town’s release of the “Cougars” of VAQ 139 (U.S.S. Ronald Regan).

In conclusion, the end result is an excellent replica of the Prowler and should be considered seriously if you are a NAVAIR buff. Visit Kinetic on their website at www.luckymodel.com. Many thanks to Stevens International (Mike Bass and Laura Carney) for the review sample.

Completed model from starboard side

Finished model from port side
Previous Next