The Grumman A.6 Intruder Modeller’s Data File Scaled Down #11 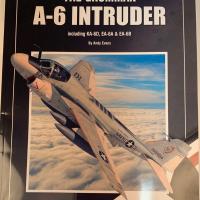 As noted in the title, this book is a scaled down version of its bigger volume on the Grumman A-6 Intruder family. This volume includes descriptions and photographs of the attack versions of the A-6, as well the tanker (KA-6D) and both electronic warfare versions, the EA-6A and the EA-6B. The book is lavishly illustrated with both color and black and white photographs with informative captions.

Chapter 1 briefly discusses the design and development of the A-6. In late 1950’s the Navy issue a request for the design of an all-weather attack aircraft with two crewmembers to replace the A-1 Skyraider. Grumman’s proposal was selected by the Navy and first flew in April of 1960. Adopted by both the Navy and the Marines, the A-6 Intruder became a mainstay of Navy and Marine Corp combat operations in Vietnam. The chapter includes a brief description of the systems installed in the A-6 to give it it’s all-weather capabilities.

Chapter 2 discusses the variants of the Intruder, starting with the little know A-6B “Iron Hand” SAM suppression aircraft, the A-6C TRIM (Trails-Roads Interdiction Multi-sensor) variant, the KA-6D tanker and the A-6E. There are also brief discussions of the proposed A-6F Intruder II and the A-6G scaled down Intruder II. There is a very brief mention of the TC-4C Acadame, which was a specialized version of the Grumman Gulfstream I with an A-6 nose grafted on used to train Intruder crews.

Chapter 2 also includes an overview of the A-6’s combat career which stretched from Viet Nam up through Desert Storm in 1991, including operations against Hezbollah and Syria positions in Lebanon (after the bombing of the US Marine barracks in Beirut) Grenada and Libya.

Chapter 3 discusses the first electronic warfare version of the A-6, the EA-6A. Originally only operated by the Marines, the EA-6A was operational in Viet Nam and was used to screen and protect Marine attack aircraft and fighters. In later years, some EA-6A’s were transferred to the Navy and were used by Fleet Electronic Warfare Support Group for training Navy aircrews and ship in electronic warfare and countermeasures. The Navy also established two Reserve squadrons, VAQ-209 and 309, which flew the EA-6A. I was a bit surprised that there was no mention of a couple of external differences between the EA-6A and the other variants. The EA-6A retained the fuselage speed-brakes that were disconnected and then discontinued on the other A-6 variants in favor of the wingtip mounted speed-brakes. In addition, the EA-6A has a third wing fence on the upper wing between the wing-fold and the outer fence and a third pylon mounted on the folding portion of the wing.

Chapter 4 deals with the ultimate electronic warfare version, the EA-6B Prowler. Used by the Navy and the Marines, the Prowler soldiered on until 2019 when the last ones were retired by the Marines.

In between Chapters 4 and 5 there are 4 pages of color profiles illustrating some of the various schemes and unit markings applied to Intruders and Prowlers over the years. I wish the author had included some FS numbers for the camouflaged aircraft as there are a couple interesting ones that would make a great model.

In chapter 5, we are treated to 4 builds, three in 1/48 (an A-6E and two EA-6B’s – all Kinetic kits) and one in 1/72 (Tamiya/Italia). Each build illustrates a different paint scheme seen on the Intruder/Prowler, including a brown on brown Afghan desert scheme for the Prowler.

The balance of the book is comprised of walkaround photos of both an Intruder and a Prowler, 1/72 line drawings of the A-6A, EA-6A, KA-6D and the EA-6B, excerpts from the A-6 flight manuals, a listing of Navy and Marine Corps squadrons that flew these aircraft and a listing of kits and accessories of the various variants.

This book is nice overview of the Intruder family and the Prowler and includes lots of great information and photographs. The color profiles offer some good inspiration for some interesting aircraft and the walkaround photos will help those who must, detail their gear wells and doors.

Highly recommended. Thank you to SAM Publications for the review sample.