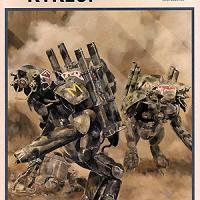 As a bit of background, and from Wikipedia, the Maschinen Krieger universe is a science fiction universe created by Japanese artist and sculptor Kow Yokoyama in the 1980s. The franchise originally began as the science fiction series SF3D which ran as monthly installments in the Japanese hobby magazine Hobby Japan from 1982 to 1985. To develop the storyline, Kow Yokoyama collaborated with Hiroshi Ichimura as story editor and Kunitaka Imai as graphic designer. The three creators drew visual inspiration from their combined interest in World War I and World War II armor and aircraft, the American space program, and films such as Star Wars, Blade Runner, and The Road Warrior. Inspired by the ILM model builders who worked on Star Wars, Yokoyama built the original models from numerous kits including armor, aircraft, and automobiles. He mostly concentrated on powered armor suits, but later included bipedal walking tanks and aircraft with anti-gravity systems.

In this kit, there are quite a few parts and all the joints are articulated, so I do not recommend this for children. The kit itself contains 22 sprues, one clear sprue, two lengths and diameters of vinyl tubing, one vinyl sprue of hoses, and a large sprue of different poly caps. This kit is similar to the Großer Hund ALTAIR built earlier, reviewed at http://web.ipmsusa3.org/content/mak-space-type-interceptor-unmanned-gro….

The easiest way to approach this build is in parts, so it was broken down into the legs, the arms, the main body, the head, and the shoulders. The legs are assembled with the feet finished first, then the lower leg, knee, and upper leg. Be careful here as they are left- and right-handed, and several holes have to be drilled. One other thing to note: there are seven poly caps in each leg so they can fully articulate. Fit is good, but the poly caps make it tight. I clamped every piece tightly and was left with only a couple seams to fill. The lower body was next, and was a snap. I left off the three armor pieces to the front. I did need filler on the hips. Once these were finished, these were set aside.

The two forearms are different and build up easily. I left the hand off of the one arm as it is the same color as the shoulders and upper arm. The shoulders were next; I followed the instructions and they assembled easily. I left off the shoulder and elbow guards for easy painting. Most all the parts are attached with polycaps. The shoulders were finished and left separate. One thing to note here is to follow the instructions to ensure that things fit. The head was assembled next and filler was required between the front and back sides. The clear parts were left off until last.

The main body was built next with no issues, but filler was required on the larger seams. One difference between this and the last build was the addition of rocket launchers on both sides, These were completed and left separate. The armored shoulder pads and front skirt were assembled also and left off to ease painting.

Since the basis for the entire MaK universe was German armor and aircraft, I went with Luftwaffe colors. There are four choices and I went with the darkest to offset my lighter colored one I built earlier. The shoulders and joints and connection parts were painted RLM 66. The main color was RLM 74 and the splotches were RLM 70 black green. I used Xtracolor which was nice, as once it dried I could go to decals. The decals were a little thick and I had to work to get them down, but Mr. Softer helped. Once done, I flat-coated and used a silver pencil and pastels to weather.

There are three lengths of vinyl that need to be trimmed and glued to the arms, and then to the main body. I then flat-coated the parts and assembled all the multiple pieces (and there a lot). I used silver for backing of the lights, the eyes, and the laser gun. The clear parts were glued on with Elmer's…and I was done.

The kit was fun and went together well. It does take filler and you need to follow the instructions, but with a little time, it makes a great addition to anyone's robot universe.

My thanks to Hobbico, Hasegawa, and IPMS/USA for the chance to build this kit. It is recommended for all those who want a fun break or are fans of Ma.K.

With Großer Hund ALTAIR
Previous Next