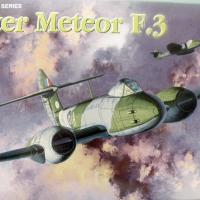 To my knowledge there were very few 1/72 scale Gloster Meteors produced so it came as a very welcome offering by Dragon.

Upon opening the box, I was impressed with the molding of this kit. The details were very fine and crisp. I consulted my research books and decided to use a white scheme, which was only used on 3 F.3 aircraft.

Assembly was pretty straight forward. The cockpit was very complete; was painted in black and was not very difficult to do. The landing gear assembly in Step 1 was a little confusing when gluing parts B-3 and B-2. I knew that the Meteor was somewhat tail- heavy so I added a load of fishing sinker shot. I don’t know how much weight I added but next time I build a Meteor, I am going to add a brick as mine still became a tail sitter.

The fit on the wing assembly was very good with only a little filler needed at the upper wing root. After the wings were fitted the flaps, landing gear and landing gear doors were added.

I was impressed with the method of adding the landing gear. Each part fit into slots that made it impossible to screw it up. One had the choice of gluing the flaps up or down.

The dive brakes on the upper and lower wing are photo etched and look very nice when added. However, you must be careful not to fill in the slots with the primer as I did.

The canopy is in three parts and may be added in the open or closed position. I would leave off the antennae and pitot tube until every thing is finished. I kept knocking them off as I applied the decals.

I painted my Meteor with Duplicolor white primer. This is my choice as it is lacquer based and dries quickly, may be sanded in a very short time and will accept any type of paint. I then sprayed Duplicolor White overall. I did most of my painting first. Lastly, I added the smaller parts such as landing gear doors, etc. If I were to build another Meteor, I would paint the airbrakes and aircraft separately and then put the air brakes on afterwards to avoid filling in the slots.

My next to last step was to add the canopy. I wish the instructions had told you where the front of the sliding part was. I think a test fit is necessary here. My final step was the decals. They are very thin and do not need a lot of setting solution. In fact, be very careful as they have a tendency to curl into themselves which makes a real problem.

I loved the kit but I found the instructions very ambiguous in many spots. Also no colors were called out. If I didn’t have some books on the Meteor, I would not know what color to paint anything except the camo scheme.

Would I recommend this kit? Yes. I loved building it and aside from the poor instructions, it was a terrific build. I actually plan to get another and do the camo scheme now that I know enough to put a ton of weight in it and to watch the decals.

I wish to thank Dragon and John Noack for giving me this kit for review.