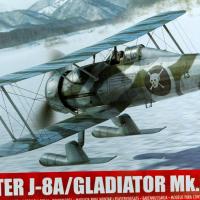 Much has been written about the Gloster Gladiator, and information is available everywhere, so this sketch will be understandably brief. The Gladiator was designed to a 1930 Air Ministry specification, and the prototype first flew in 1934. A development of the Gloster Gauntlet, the Gladiator differed in having more power and an enclosed cockpit, along with other aerodynamic improvements. The initial production order was for 23 aircraft, but eventually a total of 378 Gladiators was built between 1936 and 1937. An improved version, designated Gladiator Mk. II, has a three bladed fixed pitch Fairey-Reed metal prop and detail differences. 270 Mk. II’s were built between 1938 and 1940, when production ended.

Gladiators were active wherever the RAF operated at the beginning of the war, and many were exported. Eight squadrons were operational by late 1937, and they took part in defense exercises in England until they were eventually replaced by Hurricanes, and later, Spitfires. They also served with Auxiliary Air Force squadrons by 1939, and were sent to such places as France, Norway, the Middle East, and Malta, where they became a legend for their brief campaign against the Italians. The Royal Navy used a carrier based variant, the Sea Gladiator, which was a navalized version of the Gladiator Mk. II. Export models were used by Latvia, Lithuania, Norway, Sweden, Belgium, China, Ireland, Greece, Egypt, Iraq, Portugal, and Finland, while captured examples were used by Russia and the German Luftwaffe. Others were used by the Royal Australian air Force in the Middle East, along with Free French and South African units.

There is a lot of reference material available on the Gladiator, both on the technical development of the aircraft itself, and the careers of the men who flew the type. Beginning with the old Profile, The Gloster Gladiator, No. 98, and William Green’s 1961 War planes of the Second World War, Vol. 2, the list has expanded in recent years to include Osprey’s Gloster Gladiator Aces, by Andrew Thomas, MMP’s Gloster Gladiator, Vol. 2 & 2, by Alex Crawford, and, of course, Squadron-Signal’s Gloster Gladiator in Action, No. 187, by W. A. Harrison. Many references are also on line, so there are many options as to color schemes and markings for Gladiator models.

The instructions give a brief historical account of the Gladiator’s service life in 5 languages, and basic assembly instructions in 12 languages. The 27 assembly drawings are non-linguistic, and there is no sprue diagram. Color drawings are provided for two aircraft, a Gloster J-8A of the Royal Swedish Air Force, operating in Finland in 1940, and a Gladiator Mk. II of No. 605 Sqdn., RAF Tangmere, Sussex, in standard RAF camouflage, in August, 1939. In addition, many maintenance markings are provided, which are appropriate for both versions. The instructions are clear in any language, and consist of a total of 8 full letter sized sheets stapled together.

This kit replaces the old Gladiator kit issued by Airfix in the fifties (the one with the pilot head), and is infinitely better. There was an old Frog-Penguin kit before that, probably the basis for the WW-II recognition model, and later, Frog issued a newer kit, probably in the seventies. In addition, Heller issued a Mk. I/II combination kit, and Matchbox issued a multi-colored kit copyrighted 1973. Two Eastern European issues, Sword (including a Sea Gladiator), and Pavla kits are also available, although I haven’t seen them. A year or so ago, Hobby Boss brought out a Gladiator, which while being a fairly accurate representation, has some minor accuracy problems, which is typical for Hobby Boss. And now Airfix has redone their kit, or rather issued a new kit, engineered in England, and manufactured in India.

The Airfix kit has been issued twice, A02052, a Gladiator Mk. I, and A02063, this version, a J-8A/Gladiator Mk. II, although either version can be done from either kit, although the Mk. I kit does not include the skis or three bladed prop. Consisting of nearly 70 parts cast in soft grey styrene, the kit has a number of good features, including two sets of wheels, one flattened and one round, internal machine guns, several carburetor intakes, two props (Watts and Fairey-Reed),skis of the Swedish variety (The Norwegian skis were different), a step, starter crank handle, and two tailskids. There is even a door for the left side if you want to have this open, although you’d have to cut out the side cockpit opening for this. Canopies are provided for both versions, and can be left open or closed. There is a lot of cockpit detail, including a main floor, rear bulkhead, seat (with an extra hole in it for the pilot), and even a compass. The instrument panel is mounted on the rear cabane strut assembly. Two machine guns are supposed to be inserted in holes in the fuselage sides, although I neglected to do this, as it was easier to just attach the barrels after painting. The engine and cowling is very detailed, consisting of no less than eight parts. The landing gear fits into the fuselage securely, and the skis are well done, consisting of a total of seven parts, including the tail skid.

The kit goes together in traditional fashion, with the cockpit interior assembled. This should be standard RAF interior green. The instrument panel is mounted on the rear cabane strut structure, and the decals can be applied before the fuselage is joined. I copied them on my printer and used the paper copies, as I felt the decals were too shiny. I didn’t include the highly detailed pilot, as on my models, I am the pilot, not some blob of plastic. Once the fuselage is joined, the forward fuselage and cabanes can be attached. Then the lower wing assembly can be mounted on the bottom of the fuselage. At this point, I attached the horizontal tail surfaces, and everything lined up perfectly. The engine needs to be painted first, and detailed, although the instructions neglect to mention the color of the engine and cylinders (They say #21, but this color is not identified in the instructions.), although they say to paint the forward cowling and collector ring gunmetal grey, whereas on most drawings, it appears to be a burnt iron or bronze color. All of the sources I have show the bronze color, so that’s what I used.

Probably the most difficult part of the assembly process was the engine cowling. Instructions state that the rear portion of the engine should be painted silver and attached to the main cylinder bank. Then the whole thing should be mounted on the fuselage. At this point, the two gun barrels should be placed in position between the lower cylinders. I assumed that these were tubes that the fuselage mounted machine guns fired through, but they don’t in any way line up with the guns in the fuselage. Be sure to line the engine up perfectly, or the later steps will be very difficult. In fact, they are difficult anyway, as the lower cowl and exhaust stacks go on next, and these are clued to the engine cylinders. After drying, you are supposed to add the upper right and left sides of the cowling, and some trimming on the cylinders is required to get them straight.

This is a tedious job, probably the worst part of the assembly. I used a little bit of filler, but I’m still not totally satisfied with the cowling assembly.

The rudder attaches quite easily, but one of the rudder antenna posts needs to be removed. Once the airframe is painted, the upper wing should be mounted on the plane. The kit has a strange method of keeping the main “N” struts lined up. There are no “N” struts as such, and the two parallel struts are joined with an “X” structure between them to hold them at the right angle, with the bracings removed from the strut after the wing is secure. A drop of glue placed in the little holes attaches the struts to the lower wings, while the upper wing struts are held in place by a bar assembly. Actually, I trimmed away part of the “X” braces before assembly, making it easier to remove them after the wings were joined. Then, a little trimming and painting and the task was accomplished. The landing gear struts go on easily at the right angle, and can have either wheels or skis attached. The skis attach positively enough that you can mount the tailskid, allow it to dry, and then attach the skis. Then you can set the model on the skis and it will sit at the right angle.

I attached the canopy in the open position before painting, masked it off, and then filled the open cockpit with some kind of “cosmetic wedges”, a very soft foam-like material used by women for makeup application and removal. (The first time I used them, I swiped one off of my wife’s vanity, an soon bought a whole package of them.) The brand name is “Swisspers” disposable sponges, and it fills up a cockpit without breaking anything off inside. Then, when the painting is finished, you just remove them with tweezers. They are a wonderful interior mask, and they are made in Canada, not China. One package will last almost forever.

I painted the main airframe before attaching the upper wing. As I did the Swedish ski-plane, I painted the light grey on the lower fuselage first, masked it off, and then painted the dark green camouflage pattern. After masking this off, I painted what was left with silver. I suppose that a more realistic effect would have been achieved by freehand painting with an airbrush, but mine doesn’t paint that fine a line, so I used masking tape.

Once the plane was assembled and painted, a coat of gloss was followed by decal application. The decals went on easily, although a couple of them tended to raise up on the corners, requiring an application of Micro-sol. A coat of Dullcote softened the effect, and the model was ready for rigging. I used my wire rigging technique, using white glue to attach the wires. The rigging diagram in the instructions was useful, and the little holes drilled in the wings were helpful. Photos of the airplane were also useful. It took about an hour to fully rig the plane, and it was then finished.

This is not a kit for beginners, but for any modeler with moderate experience, it shouldn’t be a problem to do a good job on this one. There are a lot of possibilities with this kit, and I would assume that the Mk. I kit is pretty much the same. The few spare parts left over will be useful for other kits, as although this is probably the best kit on the market, you shouldn’t throw away or trade off your other Gladiator kits, as all of them (Heller, Matchbox, Frog, and Hobby Boss) are still useful kits. But this one is reasonably priced, and fun to build. Get several before inflation takes hold. Highly recommended.

Thanks to Dick Montgomery and Airfix/Hornby for the review kit. It was a fun build.

Assembly with Wing on