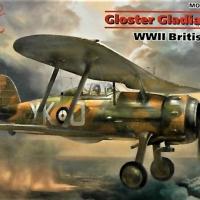 ICM continues to floor me with the boldness of their release choices, and the Gloster Gladiator in the impressive 1/32nd scale range is certainly one of them that I never expected to see in my lifetime.

The Gloster Gladiator was one of the rare biplanes to see combat service in World War 2 and was the last operation biplane fighter in British service, seeing service in most theaters of action via a number of air forces. Despite its obsolescence it acquitted itself reasonably well in combat, even making a couple of aces into the bargain.

ICM’s Gloster Gladiator comes on a sturdy side-opening box with separate lid and features a somewhat soft gray styrene as well as clear parts. This plastic seems familiar, and in fact appears to be the type of choice for Masterbox, MiniArt and other Ukrainian manufacturers. No photoetch or other frills are included, but the decal sheet offers three interesting options, all in British service. ICM now offers a decals sheet providing foreign service as well, but that’s another story. There are a couple of other options included in the kit, such as a propeller spinner and open and closed engine panels.

Assembly, as always, begins with the cockpit, and there are few surprises there. The control panel is adequately detailed, and the seat has the correct openings and fiddly bits. The side panels are fairly decent as well, but the kit makes no provision for seat belts. I made my own from flattened solder, but you can buy nice sets for this as well, I believe. Both side doors are separate items although typically only the left-hand one was used. The machine guns which fit into the cockpit area and out the fuselage ports are decently detailed but lack anything resembling ammunition feeds or controls. This doesn’t present much of a problem as they are barely visible once the fuselage is closed up.

Once the fuselage is sealed assembly of the tail and wings can start, and all feature separate control surfaces. At this point you might want to consider what approach you’ll be taking to the rigging, which is as extensive as many WW1 aircraft. I decided to use the rigging-through-the-wings approach, which was more challenging than I’d anticipated, largely because both wings are two-part affairs which meant I had to feed each line through not one hole but two. Still, it worked surprisingly well with a little patience and I’m certainly happy with the end results.

When working on the engine cowl, don’t be thrown by the drawings like I was. If you don’t study them carefully, you’ll get the impression that each exhaust should have a flat cowl plate glued to it. In actuality, these are ONLY applied if you plan on leaving the cowls off to display the engine. Otherwise, the exhausts are glued directly to the cowl assembly. I glued the plates on without knowing this and then had to prize them off again in order to complete the build as I’d intended, with the cowl closed.

As I neared the end of the assembly, I did encounter a problem with the landing gear. Due to the nature of the plastic (I think) the final elbow on each of the main gear legs proved to be extremely fragile, and I broke both off during my final build. Fortunately, it was a fairly simple procedure to drill holes in the stubs and reinforce these with bits of wire.

As to markings, I chose the box art version, as it depicts one of the top Gladiator aces serving with the British. The decals provided were surprisingly effective – snuggling down with a little setting solution and showing no silvering at all, even over a matt surface. The colors were a bit intense, so I toned them down to reflect the hot Egyptian sun where this aircraft was supposed to serve.

All told, I had far fewer problems with this somewhat complex build than I often experience in a project this size – a credit to ICM for a sensible, straight-forward assembly with few surprises. I can happily recommend this to anyone with an interest in somewhat anachronistic aircraft. It certainly does the Gladiator proud, and I hope to be able to build another one with skis when and if ICM chooses to release one. The possibilities are endless.

My thanks to ICM for the lovely kit and as always, to IPMS/USA for the faith to trust this kit to my tender mercies.