The Glorious First of June 1794 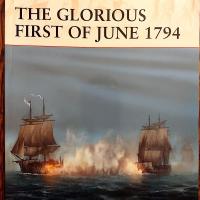 By 1765 Britain had achieved hegemony in Europe, North America, India, Africa and the West Indies over archrival France with its decisive victory in the Seven Years War (1756-1763) fought on 5 continents and the sea (Quiberon Bay). However, the overthrow of the Bourbon monarchy in 1791, and the emergence of revolutionary France was an entirely new phenomenon, and by 1793 virtually all of the major European nations, all headed by monarchs, had declared war on the new French Republic. As a result, France in 1794 was threatened by famine and risked all by organizing a massive North America to France food convoy against the Royal Navy and harsh North Atlantic seas.

"Illustrated throughout with stunning full-colour artwork, this is the full story of the only fleet action during the Age of Fighting Sail fought in the open ocean, hundreds of miles from shore. Taking place over the course of a month, the inevitable battle was to be a close-run affair, with both sides claiming victory. To the French, it was le Bataille du 13 prairial, a notable day in their new, scientific Revolutionary calendar. For the British, it was the Glorious First of June."

The book is well organized and like all Osprey monographs, provides an introduction and chronology, followed by sections on the opposing Royal Navy and Marine Nationale, their respective commanders, sailors and fleets (detailed orders of battle provided). Superior in all 3 areas, Admiral Richard (Viscount) Howe's strategy was to draw the French fleet out of its ports, meet and destroy it, thereby, ensuring freedom of movement for the British merchant fleet and invading British army, while protecting its colonies from invasion. The French strategy was far simpler, get the grain convoy safely from North America to Brest by drawing the Royal Navy far away from the convoy's path; everything else was subordinate, including its fleet, sailors, and commanders (Contre - Amiral Louis T. Villaret de Joyeuse). In the end, "it was like watching two football teams take the field playing by different sets of rules: one playing Association football (soccer to Americans), while the other followed the rules of American football". The result was both teams claimed decisive victories, and in the context of their objectives, both were correct! Spoiler alert: the grain convoy arrived safely in Brest, never harried by the Royal Navy which came within several miles on numerous occasions, the grain convoy blanketed by a dense fog. The Royal Navy sunk or captured 7 ships of the line, and received a hero's welcome, marked by King George III's visit to the Channel Fleet in Portsmouth.

The primary focus is on the naval actions beginning on May 16 and concluding the 1st of June 1794, richly illustrated with 11 pages of color maps, period illustrations, and original paintings by Edouard Groult. A thoroughly enjoyable and educational read highly recommended for history buffs and modelers.

Thanks to Osprey Publishing for the review copy, and thanks to IPMS USA for the opportunity to read and review this book.