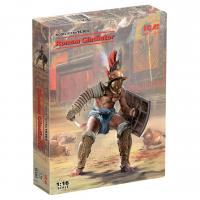 Quote from “Gladiator”, the movie, “Are you not entertained?”

ICM has released this Gladiator kit in 1/16th scale, and just a note that may be interest, ICM also offers a kit of “Roman Centurion, 1st Century, Kit # 16302 and also in 1/16th scale.

The kit includes 44 parts. There is no information to accompany this kit that indicates that this model is modeled after a particular historic figure. There is no mention of such a person and no historical or biographical information is provided. That being the case, you are free to paint the figure as you wish without a concern for precise accuracy.

If, on the other hand, you wish to model a more accurate figure then there are some references that could be useful.

As is standard practice for ICM, the box is a sturdy cardboard design. The box top fits over the carboard container, keeping it closed and presenting some excellent box art. All parts are contained in a single plastic bag.

There are three pieces of paper provided in the box. The first sheet is a photo of a ridiculously cute dog advising you of how you can request replacement parts if any are damaged. (In my experience I’ve never found a part damaged in an ICM kit.) The second sheet is a frameable illustration of a Gladiator. This image is also featured on the box top. Lastly, a “parts and color” guide is provided.

Printed front and back is a “parts and color guide”, showing illustrations of the parts runners with part numbers printed next to each part. Using this guide makes it easy to quickly identify each part during the assembly phase. The color guide lists the suggested Revell and Tamiya colors that ICM recommends. On the reverse side of this page are two drawings of the figure, fully assembled. The various parts are identified with black alphanumeric font. Color recommendations are identified with red font in small, red-outlined squares.

There is no “step by step assembly guide” provided. It is quite simple, however, to use this “parts and color guide” to determine an “order of assembly”.

After studying the “parts and color guide” I decided to, quite literally, assemble the figure from the ground up.

There is a locating notch on B2 (underside of base) and a matching locating pin on A (base riser). The mating surfaces for A and B2 are beveled. This reduces the appearance of a seam (Thanks ICM!) and also means that there is a right way/wrong way to mate these two parts. The top of the base, B1, rests “inside” A on a “ledge”. Try to position B1 so that the gap between A and B1 is the same width around the circumference of B1. Doing so will enhance the appearance of the base.

The arm will need some gentle sanding to remove the flash along the mold lines. The fingers can be attached to the hand. Attach the shield later. The shield handle is a separate piece and can be slipped into the palm of the hand after the hand/fingers have been glued together. Attach the arm to the torso. There is more about the shield below.

There is a seam molded into the arm on the inner surface, or that surface which would rest against the Gladiator’s side if he were standing erect, and at rest. Leave that seam alone. It is not “flash” but is molded detail. There are two other “flash” seams that need to be removed, one on the “elbow” side of the arm and the other on the opposite, or forward side of the arm. Attach the arm to the torso.

The right hand consists of two parts, C1 and C2. Aligning the palm/thumb can be made easier by studying the illustrations provided by ICM. The thumb will be located on the “body” side of the attachment point. A suggestion would be to wait to attach the sword and fingers of the right hand until the later stages of assembly.

There are three locating pins/holes to assist in correct alignment of these two parts, C10 and C11. Each leg has some helpful locating shapes located at the point where each leg will fit into the waist assembly. It is recommended to dry-fit each leg into the correct position just so one is confident that the leg is correctly positioned when gluing it into place.

There is a little flash on both sides of the head, but the lines of flash are extremely small. I used the back side of an Xacto blade to remove the flash, taking under a minute.

It is advisable to remove all of the parts with a razor saw and clean the gate residue from those parts. Using a razor saw significantly reduces the amount of gate residue that needs to be cleaned off the part. Study the Color Guide/Part Guide and you will see that D1 and D2 form the crown of the helmet, complete with the sculpture of a bird. Attach these two parts together. Part D12 is the “brow” of the helmet and slips into position with D1 and 2 properly, thanks to the beveled edge that ICM molded unto D12. D9 is the “brim” of the helmet. First, note that there is a small locating pin on the inside of the opening that the helmet crown will eventually cover. Use that locating pin to determine the “front” of D9, the helmet brim. Then dry-fit the crown sub-assembly so that the bird sculpture faces the same direction as that locating pin. Also note the two slight downward bends in the brim of the helmet, D9. Those downward facing bends should be toward the back of the helmet. An important bit of advice would be to not glue the face shield onto the helmet sub-assembly until much later in the assembly/painting process. The helmet with face shield attached cannot fit over the Gladiator’s head. The face shield will need to be attached as, most likely, one of the final steps in the assembly process. The Gladiator’s face and upper body should be painted and finished prior to attaching the helmet and face shield. It should be noted that there is no “chin strap” provided, although there are two points on the underside of the helmet brim that could be used as attachment points upon which a chin strap could be located. It would be an easy task to “scratch” a chin strap. With a home-made chin strap, it would be possible to leave the face shield off of the figure, thus exposing the face of the figure.

There are two mold release marks on the inner surface of the shield that need to be removed. It is advisable to attach those parts that need to be glued to the rectangular shield at this time, with the notable exception of the handle. Of course, it is easier to paint the shield prior to attaching it and the handle to the Gladiator’s hand.

There appears to be an option regarding the shield that the Gladiator will be carrying. It seems that there are two shields provided in the kit. There is a large, rectangular shield, part 10, but there is also a smaller circular shield, part 15. Part 15 does not appear on the “parts and color guide”, however, the location guides on the inside surface of part 15 match the handle, part 16. As you can see in the accompanying images, I chose to attach the smaller shield. Regarding the larger, rectangular shield, the illustrations provided in the kit show a set of “leaves” on the exterior of the shield. Even the paint guide suggests that these leaves be painted with a “flat yellow’. However, the leaves are not molded on the shield, nor were there parts representing the leaves included in the kit. I was not about to attempt to hand-paint them and, besides, I went with the smaller circular shield.

Wikipedia provides some interesting information about gladiators. “A gladiator training school was called a ludus. At its head was the owner and trainer of gladiators, called a lanista. Among types of gladiator were the Thracian, who carried a small round shield called a parma and a retiarius who carried a fishnet and a trident.”

It appears that ICM is giving Lanistas the option to equip this Gladiator with a “parma”.

Seams to be Filled

Although there are some seams that are visible, they are not “severe” and are easily filled. I used liquid putty provided by a well-known Japanese company along the upper-most portion of shoulders between the base of the neck and the cloth covering on the right shoulder and leather shoulder strap on the left shoulder. Also, putty was applied to the seams on each side of the torso, along the contact points where the legs meet the shorts the Gladiator is wearing, on the seams along the ankle protectors, and on both sides of the waist where front and rear waist parts meet up.

There are some small parts such as feathers, “leather straps”, and the sword, that can be painted prior to being attached to the figure. It will be important to be careful when handling the model while attaching these small parts. In fact, it is advisable to make the base ready for the figure to be attached, and then permanently mount the figure on the base prior to attached these few remaining bits.

Basic assembly took about 2 hours, so the project can move toward the “painting” phase rather quickly. Total time invested on the project is just under 9 hours.

I am very satisfied with the quality of the kit. The “fit” was particularly good and the detail on the face (which is barely visible through the face shield) is very good. The detail on the armor, the shield and the headgear is outstanding. I found this project to be highly enjoyable throughout the project. So, to answer the question Maximus posed, “Yes, I am entertained!”

Well Done to ICM! Thanks to ICM for providing this review sample to IPMS/USA.