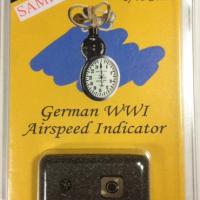 This is a very small item when assembled, as the photographs will show. The model is composed of four parts: the body of the indicator, cast in a slick, red plastic; a bezel made from thin steel similar to a photo etch part; the wind vane assembly which appears to me to be of plastic or resin; and two identical instrument dials printed in black on a thin plastic sheet coated with what appears to be white paint.

The instructions are on the reverse of the packaging sheet and show all of the parts painted, prepared and ready to go. The resulting photographs show an extremely detailed and precise completed wind powered indicator. However, reality does not meet up with advertising in this instance.

A close inspection of the actual parts in the package reveals some significant departures from that pictured in the packaging. The body of the instrument is shown in the photographs to be more detailed than it is in actuality with two mounting holes, and a fine bead around the upper body where the two parts join. The bead join is there, but the two holes are not.

The instrument dial face is crisp and readable in the photographs, but not as much in the actual dial face provided.

The wind vane assembly is comparably less detailed in the part than in the photographs.

Now, in defense of the actual model, it would be very difficult, and costly, to accurately reproduce those features. That’s understandable, but in my view, the photographs should accurately reflect what’s in the package. I suspect the photographs were taken from a much larger scale mock-up, or from CAD illustrations, not from an actual 1:48 scale built representation of a production kit.

Assembly and Painting: The slick red plastic that was used to make the body of the instrument does not accept paint readily. It’s best to put on a few thin coats with drying time in between. The vanes are finely made and one should use a VERY thin paint on them. As you will see, I did not, using Vallejo Brass, thinned from the bottle. The instructions show the vanes in bronze, but the photographs show them in a bare metal with bronze on the insides of the cups. Good luck trying to paint this scheme…

The dial faces (there are two, one is a spare) are to be cut out of the plastic sheet. I initially thought they would be stickers one could peel off and stick on the tiny body’s face. Not so. You have to punch or cut them out. I don’t have a punch so I had to cut one out with my fly-tying scissors. Not easy given the size of the dial faces - about the width of two grains of rice..

I stuck the dial face on with Gator Glue. The bezel went on with a tiny amount of CA, as did the vanes. Don’t use CA to attach the bezel as it will run onto the dial face. If I had the patience, I’d replace the face with the spare. It would have been better if there had been some mounting hole or other feature to securely mount the vanes on the small, protruding nub on the body. As is was, a drop of CA and some careful adjustments with the help of my Optivisor got it secured.

Looking on the GasPatch models site, it is apparent that their illustrations and photographs are either of a larger scale prototype or graphics representation of the model, or are in 1:32 scale. From these, I think the 1:32 scale will obviously be in finer production detail than the 1:48 scale model. Bearing this in mind, one should think carefully about how this model will fit in with your 1:48 scale German WWI model. Very careful assembly, with some trimming and dressing of the parts, along with careful painting will produce an acceptable accessory. Personally, I don’t care to put that much effort into what is an optional accessory, but for those modelers who do and care about super-detailing and accuracy, it might be worth it.

This item is recommended for 1:48 scale super detailers who enjoy working with teensy bits and pieces. Thanks to Gaspatch for supplying this product to IPMS-USA for review.