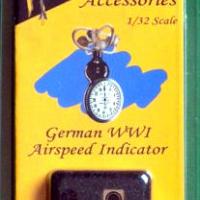 The cascade of kits, aftermarket details sets, and decals for WWI aircraft has given model builders reason to play in an appealing arena that only a few had the nerve to venture into in the past. Because most of these products have been conceived and produced in the last four or five years, current technologies have blessed builders with ever-improving quality. And, since the level of detail molded into today’s kit components – especially in 1/32 scale – is literally breathtaking, any aftermarket detail that is introduced into the fray must equal or surpass what will be found inside the kit box.

GasPatch apparently has all this figured out. This new company’s growing line of aftermarket detail parts is about as high on the quality scale as anybody else has been able to climb. The multiple styles of 1/48 and 1/32 scale cast metal turnbuckles recently reviewed on this site are testimony to that. As the review accurately states: “these items represent a significant and notable advance in the quality of aftermarket parts for WWI aircraft”.

Well, GasPatch isn’t resting on their laurels. They have followed the turnbuckles with a highly detailed German Airspeed Indicator kit (available in both 1/48 and 1/32 scale) that will add considerable realism to models of many German WWI aircraft. This small aftermarket detail is made up of four jewel-like parts: the body of the mechanical anemometer, the rotating cup unit, a printed dial face, and a metal bezel. These components assemble into a convincing miniature replica of the real thing…and the real thing wasn’t all that big to begin with.

The item I received to review was the 1/32 scale version, but the 1/48 scale version is identical…only smaller. As the photo above shows, the components come well packaged in a carded blister pack with a foam insert to protect each of the delicate parts. Assembly and painting instructions are printed on the inside of the folded card. The assembly is very simple, but the small size of the components demands care be exercised when preparing, painting, and handling them. Most modelers will find it necessary to use pointed tweezers, and the locking style is advisable. After pre-painting the body and the rotating cup parts, the instructions recommend that everything be assembled with “white glue or similar”. I believe that “similar” might better be described as “Future”.

After cutting out one of the dial faces (two are provided), I trued up the edges with a sanding stick until it fit perfectly inside the recessed circle on the body of the anemometer and stabilized it with a spot of white glue. I then placed the photo etched ring and applied a coating of Future with a small pointed brush to hold these three dissimilar components together. After everything had dried, I attached the rotating cup unit with a drop of superglue and…Voilà…I had an airspeed indicator ready to be attached to my next WWI German aircraft.

This item is highly recommended to anyone who wants to add a higher level of detail to a model of any number of WWI German aircraft that used a strut-mounted hemispherical cup anemometer to measure wind speed. My thanks to GasPatch Models for providing the sample and IPMS/USA for the opportunity to review this little gem.