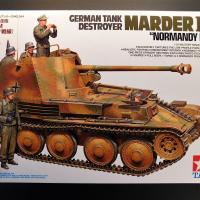 This kit represents the final Marder series of tank destroyer, the model M, that was used in Normandy during the D-Day operations. This version of the Marder was the most produced by the Germans during World War II. Tamiya has taken their kit # 35255 Marder III M from 2002 and added some new parts and figures. Gone are the one-piece rubber band style tracks being replaced with two sprues of link and length tracks. These new tracks make up two sprues that also include new drive sprockets and a dozen 7.5cm rounds to fit into the side ammo bins. A new sprue with four new figures, helmets and headsets is included. The new instruction sheet is in booklet style, not the older Tamiya trifold style. This is nice and helps in referring to different assembly steps – just flips the pages, not the whole sheet. There are 12 pages consisting of 22 steps in the instructions. Along with this is a separate color page showing one Normandy Marder on both sides. This is used for a painting guide and where to place the five decals. Another four-page history booklet is enclosed. The only photo etched part is the perforated muffler cover that comes with a length of brass wire to secure it.

The construction begins with assembling the three-piece lower hull, adding the fire wall and then adding the hull top. The instruction recommends taping the hull top on while you glue, but I had no trouble with it fitting correctly while I glued it. The suspension comes next and make sure you get the suspension arms, parts A3 and A4, all level on the ground, since the road wheels will mount on them later. I noticed they wanted to bow out then apply pressure to the mounting point. The road wheels do not have poly caps in them, so they fit a little wobbly on their mounting points. There also is some flash on the front sprocket holders. I did not notice this until after I glued them on, but they should be covered by the drive sprockets. I left the road wheels and tracks off until the end for painting purposes. The tracks are link and length, There is not much clean up except the sprue gates and the links fit together well with a little glue.

Next, we move to the fighting compartment assembly. There are quite a few knock out pin marks on the inside of the side walls, but most will be hidden by added details. The few towards the top need to be sanded out. On the grill on the right side, there are rounded mold release pins that need to be cut off the inside of the grills. The exhaust pipe that runs to the rear muffle is installed here, but I left it off until the end. I also had to cut about an inch off for it fit after assembly, but this missing part is hidden anyways. The fighting compartment sides fit great and almost stay on without glue. I wish I would have left parts G50 until after painting, since I keep breaking one and bending the other after assembly. These are the rear tarp mounting polls on the upper rear of the fighting compartment.

More nasty pin marks are on the inside of the front lighting brackets and the gun travel lock. Luckily, the open driver’s hatch will block most the travel lock’s pin marks. The only photo etched part is the muffler screen guard. Tamiya gives you a length of brass wire to tie this on, but I found it easier to just use super glue. I bent this guard around my hobby knife handle and that worked better then using the F sprue as the instructions suggest. I left the tail gate down, so most of this screen is hidden from view. The 7.5cm gun has quick a few small parts, but the fit is great and assemblies quickly, in about 20 minutes. I like how Tamiya uses a poly cap to secure the gun, so you can take it off later if you want access to the interior. The two-piece gun barrel seam was no problem sanding out. The driver’s hatch is molded in one piece, so I had to cut it in half to pose it open since I wanted to use the new driver figure. The four new figures are newly tooled and look great. There uniform collars are molded separately, to help give that undercut look. There is one original figure included from the 2002 release and he has some softer details. He was the commander in the older kit, but we get a new commander now, so he just stands outside the vehicle as a grenadier. The new crewman also includes a loader and a gunner. The help give the kit a look of action, since they are in the process of firing the gun. Tamiya has been updating older kits with new figures giving them an action pose. There also are new 7.5cm gun rounds and shell casing.

I used Tamiya standard three colors for German camouflage, XF-60 Dark Yellow, XF-61 Dark Green and XF-64 Red Brown. I did lighten them with about 25% XF-57 Buff. The five decals laid down great over a gloss coat with a couple applications of setting solution. They do seem a little thick, but that is typical for Tamiya decals.

Overall, I enjoyed building this kit, there were no fit problems and the new figures help add life to the original kit. I would like to thank Tamiya and IPMS for the opportunity to build and review this fun kit.