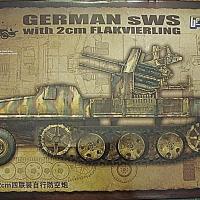 The Schwere Wehrmachtschlepper (SWS) was a heavy half track manufactured by Bussing-NAG and Tatra from December, 1943 to March, 1945. To streamline production, the SWS was simple to produce when compared to the Sdkfz 251 series. Approximately 825 were built. Beginning in mid-1944, an armored cab version was introduced and utilized for mobile flak guns. While this vehicle may not qualify as a paper panzer, it’s pretty close. I found one very fuzzy photograph on line, so it did exist; however there are no production figures for the variant depicted in this kit and so one can only assume that the numbers were low.

Great Wall Hobby has already produced a number of variants of the SWS, so it’s only fair that they continue this trend and add yet another variant to this series. This kit has the armored cab and a flat bed to accommodate the 2 cm Flakvierling. The kit has fourteen sprues including two that include individual track links and a sheet of brass. In the case of this kit, it came with a supplemental brass set (Great Wall Hobby, L3525T) but I used very little of it. The sprues were all tightly packed together in a single plastic bag. Unfortunately, part no. C 43 was damaged as a result of the tightly packed sprues. The instructions are relatively easy to follow. Each step is composed of exploded diagrams of the various subcomponents. The illustrations should be studied closely and parts dry fitted before final assembly.

The chassis goes together first. There is no engine, but nestled in the chassis is a winch, fuel tank, and compressed air bottles. The plastic is very soft and the pour gates intrude on nearly every part. When the parts are removed from the sprue, each pour gate must be carefully removed and the resulting bump sanded flat. While the detail on the parts is very good, the fact that many pieces had to be carefully prepared before assembling them was irritating (See Fig. 1).

As with all German halftracks of the period, the suspension is made of interlevered road wheels. The instructions are clear on their order and go on without a problem. The tracks are individual links. They are all still on the sprue and need to be cut out. They go together without a problem, but each link must be lightly sanded to insure a tight fit with its partner. If you do not remove all of the sprue attachment points, the links will not fit together properly. Also, be gentle with the main drive wheels. While the wheels themselves are big and beefy, the pins that hold them to the body are not. I snapped off one of them while I was attaching the tracks.

The cab goes together next. On part C 43, the two thin plastic bars that go across the roof were damaged. I glued them back together, but they were still very fragile. A great deal of care was needed when it was time to attach the roof to the cab (part C 37). It took repeated test fittings until I felt confident enough to glue the parts together. The dash board is well detailed and includes decals of the various dials and the speedometer. A little bit of surgery is needed on the cab for the flak version of the SwS. The cab fits onto the body very well (Fig. 2).

The bed that the flak gun sits on has sides that can be either assembled up or down depending upon how you want to depict the flak. Unlike that ol’ Tamiya mesh (remember that!?) the grates are brass and fit snugly into their plastic brackets. I chose the firing mode (Fig. 3).

The flak gun is a kit in itself. It looks accurate when comparing it to photographs on line. It has considerably more detail than the old Tamiya kit and does not compromise on detail except in one regard. While the kit includes a sheet of brass, the sight is solid plastic, which is a disappointment. The only other challenge for me was the way the weapons attached to the body. The attachment points are very small making it difficult to keep each guy properly aligned. The weapon can be completed either ready to fire or in transit mode (Fig. 4).

The kit comes with a separate full color sheet for the painting guide. The guide includes call outs for Tamiya, Vallejo, and Hobby Colour paints. I prefer Tamiya. The overall color is dark Yellow (KF-60) with stripes in olive green (XF-61) and red brown (XF-64).

While there will always be some arguments over late war vehicles in terms of numbers fielded and there colors, this particular vehicle is a nice addition to Great Wall’s fleet of SWS halftracks. With the exception of some of the issues called out in the review, it’s a good kit and goes together relatively easily.

Thank you to Dragon USA and IPMS/USA for providing me with this kit for reviewing!