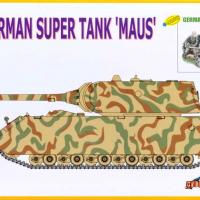 This super heavy tank project was started in November, 1941. By May of 1942, the size of this tank had increased varied from 70 to 120 tons, and its armament varied from 10.5cm to 15cm, finally settling on 12.8cm, then adding a second gun of 7.5cm. This project slowly progressed due to many changes, lack of adequate motors to propel the beast, and constant competing for materials and space in the production cycles. The plan was for 180 of the tanks, but only 2 were delivered to the testing center and were there at the end of the war. These two tanks were blown up by the Germans to keep the Red Army from capturing them. However, the Russians did find several hulls and turrets at the Krupp works and apparently “built” an example that is now in the Kubinka Tank Museum.

Here is my saga involving the tracks:

These are NOT Magic Tracks that require no cleanup. There were ejector pin marks on the inner face of each track and they required clean up. These are not workable tracks so I needed to glue them together. However, the mating points between the individual track pieces are very small, and Tamiya super thin glue did not hold them together very well. I tried Tenax without any better results. I did get the tracks together with Micro-Mark’s SAMESTUFF. Using the method listed below failed due to the tracks coming apart (before using the SAMESTUFF). This is due partly to small contact points and partly to the type of adhesive I used. Eventually, I resorted to gluing the parts directly to the idler wheel and drive sprocket and did not worry about the looks of the run on the upper part as they are hidden by the side shields.

The method I use to glue normal individual tracks links together is as follows:

This tank was in the testing stage at the end of the war. The paint schemes are fictional.

This is a repop of one of Dragons first kits and boxed with a figure set and sold at a good price. Generally, the molding was okay, there were few ejector pin marks that required filling, and the mold seams were subdued.

The instructions are simple and easy to follow for the tank. The figures did not show the add-on parts like the bread bag, etc. You have to pick what you want and add it.

The color call outs are for Testors Model Master enamel and Gunze paints. I continue to see a weakness in the painting instructions from all kit makers. Instructions for the small parts like the pioneer tools and travel lights are never listed or shown. Here you have to guess or mimic what someone else has done. The painting instructions for the figures were incomplete. It showed the main color, but nothing for the add-on items. The decals are by Cartograf and are up to their usual high standards. There are even decals for the weapons carried by the tank hunting figures.

This is a kit of two levels. The basic model less the tracks would be a great starter kit for anyone. However, the tracks move the kit almost to the expert level. The tracks require an inordinate amount of effort to get them correctly mounted. I can recommend this kit to all WWII modelers with the warning about the work required to get the tracks on.

For this variant are included in the following books: