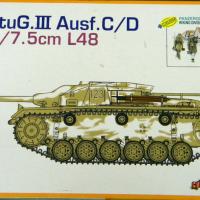 Before World War II started, Germany had already begun to investigate the feasibility of putting infantry support guns under armor and giving them cross-country mobility, providing heavy fire support to infantry units during the advance. This led to the line of vehicles collectively known as Sturmgeschutz. Built on converted Panzer III chassis, they were produced in ever increasing numbers right up to the end of the war. Continuous up-grades were made as their roles evolved. Originally envisioned to provide on-call, organic fire support to infantry units during the assault, they became premier tank killers of the German armored forces by the end of hostilities.

In their work entitled “Sturmgeschutz: Development Production Deployment”, the authors Muller and Zimmerman* state very clearly that none of the factories engaged in Sturmgeschutz production ever converted any of the short gunned versions to either the L-43 or L-48 armed versions, at least as far as any surviving factory records indicate. They do concede that conversions of this type were undertaken by the heavy workshop units. This model depicts such a vehicle: an early model infantry support vehicle up-gunned and up-armored to fulfill the anti-tank role in addition to fire support duties.

The kit consists of 202 parts on 7 sprues, plus photoetched screens and antenna trough supports, separately bagged Magic tracks, in different shades of grey for left and right, and bonus figures, consisting of the “Wiking, Hungary, 1945” set. 5 sprues of medium grey plastic comprise the vehicle itself, with numerous duplicate or unused parts.

Assembly starts with the lower hull and running gear, and features a late-war variant of the drive sprocket without the central hub cap. The forward road wheels were left pristine and painted dark yellow, to suggest newer replacement wheels. The rearward ones were heavily dinged up, and finished in original dark grey. The outlines for the hull side hatches were sanded off. The mufflers were also beat up quite severely.

Moving on to the upper hull, supplemental bow armor plates were fashioned from .020 sheet stock, and detailed with heat-engraved weld lines. The driver’s and off-side hull armor was reinforced by stealing the extra plates from an old, recycled StuG III G, with the mounting bolt heads shaved off. Then the corresponding holes were drilled out. These were also “welded’ in place, as was a new roof ventilator, added to cope with the increased fumes and smoke from the larger main gun cartridges. The cable hold-downs on the rear deck were added, but left empty.

The rear flange of the new gun mantlet was narrowed to allow for some gun traverse. A figure was dropped into the commander’s hatch for scale, with detail added to the open hatch flap. Further additions include a tool box, extra breaker bar, towing cable, and a replacement jack. (I somehow lost the original).

Finishing started with Tamiya acrylics, starting with German grey. This was altered with thin, blotchy applications of Dark Grey and RLM Grey. The superstructure markings were airbrushed through stencils, while the split cross on the rear is a decal. After sealing with Future floor wax, various filters; overall, and pin washes; and pastel chalks were applied to “age” the original finish. The newer parts received the later war dark yellow. These included the muzzle brake; mantlet; front road wheels and drive sprockets; and the new roof ventilator.

I had great fun building this kit, more so because the variant gave me lots of room for optional looks. Different colors and parts from different time frames could be combined on one kit. The workshop crews would have used whatever was at hand to upgrade this vehicle, getting it back into action as soon as possible. It also fits in well with my collection of the different marks of the StuG III.