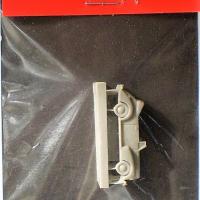 Longtime readers of IPMS/USA reviews will know that I tend to prefer the tiny stuff. So it shouldn't come as too big a surprise that when Brengun released some accessory items for those of us that build in a diminutive scale (1:144) that I put in my bid for this kit review. 'Kit Review' may be too strong a phrase as these small German Staff Cars 3D printed, in resin, and come as one piece. The only assembly of the actual car is to remove it from the casting block. It should be noted that these cars represent an Opel Admiral Cabriolet, circa 1938.

The kit aspect kicks in when you consider that Brengun provides a fret of photo-etch for details and a small set of decals. The decal sheet has license markings for two automobiles with the photo-etch fret holding detail bits for the license plates (two styles), command/rank pendant carriers (usually mounted on the front fenders), some pioneer tools, and a steering wheel. Brengun has considerately 3D printed the steering column. The assemble instructions suggest that you need to add that item yourself. (?) Interior detail of these cars is more than adequate for this scale. In fact, it is quite nice!

The front windscreen is printed open but the driver and front passenger side windows are not. You could get crafty and remove the resin from within the side window frames. Do be careful. It looks an easy thing to muck up. Nevertheless, you will need to remove the flash from the main windscreen as well as the flash from behind the front and rear bumpers. (Note the photo with the blackened areas.) The product, Kristol Clear, looks to be a good way to simulate the window glass. I chose to use some clear acetate. In lieu of removing the resin from with the side frames you might find that a little dab of clear gloss will suffice.

There has been some friendly banter between myself and Doctor Phil about how much extra time I might need to complete this review. [Technical Note: Doctor Phil is actually Phil Peterson. He is the guy that sends out the list of available review items and ships them to us IPMS/USA reviewer corps people. My petition for an extra six months to complete this difficult project is currently under review.]

Brengun provides color suggestions (silver) for the bumpers, hub caps, and some suggestions for the body color with the assembly instructions. This is where you can really shine. While most of the these staff cars appeared in a some shade of overall Panzer gray, they also appeared in a three-tone camo scheme (Dark Yellow with brown and green accents) as well as a lovely two-tone scheme common to the era. Those cars were generally confiscated directly from the factory early in WWII. Or, you can always go with basic black.

As you can see, I went with a three-tone camo scheme, just because. The car was painted an over-all Desert Yellow with the green and brown splotches applied with artist pastels.

While I definitely could have used additional time to complete this build there really isn't that much too it. You, as I, will probably spend more time on the paint job than on the actually assembly. With two complete kits per package, these 1/144th scale German Staff Car Cabriolet from Brengun will make a nice addition to any appropriate diorama or vignette. It should be noted that Brengun has a companion release of 1/144th scale American Staff Cars. Stay to to this channel, as that review should be appearing soon.

My thanks to Brengun/Hauler and IPMS/USA for the review copy.

Comparison On &amp; Off Pour Block