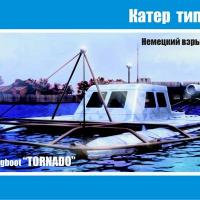 As WWII started going towards its end and the Germans were backed into a corner, they came up with some interesting ideas to try and turn the tide of the war around. Like the Japanese Kamikaze group, the German Kriegsmarine came up with the Sprengboot Tornado. The thought was to take two of the large floats from a Ju-52 Floatplane and add 7-800kg of explosives and provide power with the V-1’s pulsejet engine. The theory was to get the boat up to speed of 53 mph having a pilot guide the ship and when close the pilot would take an attached boat or just bail out while the Tornado was remotely guided to hit the target. One of these was built and tested for sea trials but was destroyed as the allies overtook Europe. MikroMir has produced a kit of this very unusual subject in large 1/35 scale so let’s look in the box.

The first thing of notice is the four large pontoon halves accompanied by three sprues of parts to finish the build. Also included are a sprue of clear parts, a photoetch sheet and clear instrument panel. There are no markings included.

I started construction with the floats using large clamps to hold it together. The parts are beefy and took a little sand and the bottoms mated well. The top seams took a little putty but remember, some will be covered by the cabin. While these were drying, I turned to the main cabin. The top cabin is built from four parts- take your time and align these and it will minimize the sanding later. The bottom cabin is built from five walls plus a three-part seat and steering wheel. One thing to note here is that the instructions show a layered approach to the instrument panel with a clear film representing in dials. Problem is that the PE parts are solid and the only way to see the film is to drill it out. I opted to ignore the film and painted the panel and weathered it and added to the cockpit. I elected to not add the windows now but should have test fit them…more on that later.

The top and bottom cabin were glued and puttied and these were added to the floats. It took a couple applications of smoothed over filler but the seams were gone. The front bumper was built and added. There were a few sink marks but it was simple to putty and sand smooth. The rudder assemblies were built and added. The rudders themselves are left and right handed. Make sure that the slot for the control tabs are towards the center of the boat.

The photoetch louvers were added to the back of the cockpit. I primed the kit and painted it with dark gray splotches in Tamiya XF-19 Sky Gray. I mixed a lighter color similar to the lighter U-boat colors. I used the Gyro Cutter and Tamiya tape to mask the splotches and over shot with the mixed color. There are no decals so I highlighted some panel lines with pastel and sealed with Dullcote.

I built the pulsejet engine at this time. There is a great set of PE for the flappers and grates in the engine and these were added and the outside sanded smooth. I engraved the panel lines and sprayed the engine silver. The supports were added and the engine attached to the back and flat coated. Looking at all the drawings I could find, I noticed there was rigging for the rear engine and the front light. These are not noted in the instructions.

The windows were added. These did not fit well and required some fitting and sanding and fooling around but they eventually succumbed to my persistence. Last thing to add was the lights which were painted silver and the clear parts added.

While this is not simple being a multimedia kit and limited run, it is fairly simple to build and the subject matter is just plain cool. Highly recommended!

My thanks to Mikro Mir and IPMS/USA for the opportunity to review the kit.