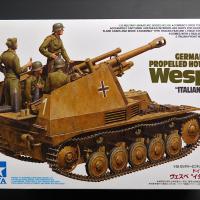 The Wespe was in production from February 1943 until June 1944 by taking a Panzer II chassis, moving the engine to the front right and adding a fighting compartment with a 105mm howitzer in it.

This kit is a re-issue of Tamiya #35200 released in 1996, but with two new sprues. The first new sprue has link and length track, interior details, and weapons. The second sprue has four crewmen in the action of loading and firing the gun. The decals are new and are for two Italian campaign vehicles, hence the “Italian Front” on the box. The kit includes a length of white string to be used as the tow cable. The other five sprues are from the original 1996 release. There are no photoetched parts or clear parts. The instructions are in a booklet form consisting of 12 pages, 20 construction steps and two black and white painting / decal options. I like how Tamiya has been going away from their older foldout instruction sheets and going to these booklet styles on the latest new releases. This booklet is very clear and uncluttered, so I did not encounter any errors or confusing parts on the instructions.

The lower hull is a bathtub style with the one-piece suspension assembly being added in the first step. The socket is a new part to match with the new tracks, so do not use the older 1996 sprockets on the sprue with the road wheels. I think the original came with vinyl tracks. Be careful cutting the muffle half, part D12, off the sprue since the sprue gates are the muffle mounting strap connectors that stick out. The tailpipe mounting hole is too big, so I put putty in it, then inserted the tailpipe. The tracks are very well detailed and only need the sprue gate areas cut off. They are somewhat easy to assembly. I used blue tack to mount the roadwheels and sprockets, then glued the tracks together on the vehicle. I did leave them unglued between the top run and where they go around the sprocket, so I could paint them off the vehicle. It is best to start with the top run of tracks, since it fits onto the return rollers and has the sag molded into it.

The barrel is still a two-piece assembly with the muzzle break molded on. I think this is one area Tamiya should have improved this kit. With better slide molding than in 1996, they could have replaced this with one-piece and the muzzle break a separate part. I did have a little seam issue with the muzzle break, but putty helped hide that. The barrel just slides into its cradle, so I left it off until the end to aid in painting all the details on this gun cradle. The gun is fully movable, since the cradle is attached to the upper hull by a pin that does not get glued. There is a couple knock out pin marks on the inside of the gun shield that can barely been seen after assembly, I sanded them down. When gluing the gun assembly onto the gun shield, I had to spread the gun mounts, parts D28 and D29, out so they would line up with the channel on the inside of the gun shield, part D25.

The upper hull comes next with adding the driver’s hatches. These hatches have details on the interior, but there are no details in the driver’s compartment. I think I over-sanded the gate marks on the top drivers hatches, because I got a gap where the two hatches meet. I installed the gun travel lock to be movable by inserting it into the two mounting brackets first, then sliding these two brackets into the holes for gluing. I left off the spare track and it’s mounting bracket to paint separately. Usually you can install the mount, then slide the tracks in later, but this mount sandwiches the spare tracks with the hull. The upper hull fits onto the lower hull nicely with no gaps or pressure needed to seat properly.

The fighting compartment has loads of details added to the side walls. I did drill out the machine pistol barrels, but they are not too noticeable after installing. The side powder bins could be positioned open, since the powder canisters are molded inside them. Also, the rear bin that holds the rounds could be opened up and a few of the 105mm rounds can be placed in the holders inside. The instructions do not mention this. The radio is a nice touch and some wiring for a handset or to the antenna could be added. There are about eight knock out pin marks on the side walls, but most will be hidden by added parts. Just the few along the top need to be filled and sanded. The same with the rear tailgate and the two pin marks on the inside. I left the sides and rear plate off the fighting compartment until after painting. I found this made it easier to paint the gun and inside the gun shields. I did notice two shallow indentations on the exterior of the walls after I finished painting. I think these were small casting errors in the plastic.

The four figures are newly tooled for this release. The commander is standing inside the tailgate holding a piece of paper. There is a decal that goes on this paper with some German writing on it. The gunner is standing up and looking out the top. The loader is standing holding a round with the last crewman holding what looks like rammer. The details on the figures is quite good. I did undercut the epaulets and belts with the back of a x-acto knife. The lapels are a separate piece, so they give a good 3D look. The faces are pretty good for plastic molding and the helmets will shade most of their faces. I left three of the faces attached to the sprues, since the sprue gates are on the top of their heads which will be covered by these helmets. This makes it lot easier to paint. I added some helmet decals and uniform decals from my spare box, as these do not come with this kit.

I primed with a black primer and found no fit issues like gaps or mis-alignments. I used Tamiya’s XF-60 Dark Yellow lighted with about 20% XF-57 Buff for the base coat. The figures got airbrushed XF-65 Field Grey. A couple coats of Future were applied before the decals. These decals went down great. I did trim the balkenkreuz and number 11 decals to take out a lot of the clear decal holding these two together. I was worried about getting silvering in this large clear area. A few coats of decal setting solution and all the decals laid down fine.

I would like to thank Tamiya and IPMS for the opportunity to build and review this fun kit.

Left side of Wespe lower hull

Right side view of fighting compartment and figures