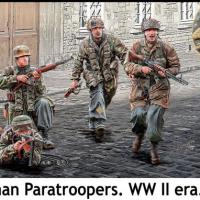 Master Box LTD is an Ukranian company specializing primarily in 1/24, 1/32, and 1/35 military and historical figures. They also produce some fantasy subjects, and a line of 1/72 WWI AFVs, and 1/35 vehicles. The company tends to package figures in groups to support a stand-alone vignette or diorama.

This kit features four figures from one of Germany’s elite infantry units during World War II, the German paratroopers, or Fallschirmjäger. Unlike other countries during World War II, the Fallschirmjäger were part of the Luftwaffe, as opposed to the regular army, and as such had some notable differences in their uniforms and equipment. Master Box captures these differences perfectly.

The four figures and their equipment are molded in light grey styrene on a single sprue. Each figure is comprised of six pieces, with the legs, arms, head and torso all being separate. One figure is in a prone position armed with a MP-40, another is kneeling armed with a Mauser, one is standing/advancing armed with a FG-42, and the last is standing/advancing armed with a Mauser. Each figure comes with the same standard equipment consisting of a bread bag, shovel, ammunition, gas mask, knife, paratrooper’s helmet, and canteen. One figure has a German stick grenade included in his equipment. All of the equipment is molded separately from the body, which allows the modeler to add as much equipment as they prefer, while creating a nicer level of depth to the items when compared to having the equipment molded directly on the figure’s body.

The molds are nicely done with almost no flash and requiring little, to no cleanup once you’ve taken care of the normal sprue gate marks and seam lines. Construction was simple and each figure comes with a separately detailed head and face to create distinct differences. Molding the equipment separate from the body allows the modeler to paint the equipment separately from the figure while still attached to the sprue, if desired.

Construction and painting instructions for the figures are detailed on the back of the box, with paint colors provided in both Vallejo and Lifecolor.

For the price, the modeler gets a set of quality figures and equipment on par with some of the best figures out there. The moldings are excellent and while I question how useful a prone figure is, the other three figures can be used in a variety of scenes, dioramas, or vignettes. The construction is quick and straight-forward, and the end result is a set of four very nice figures. Whether you're a Fallschirmjäger modeler or just looking for material for your next diorama, this set makes a great addition and is highly recommended.

Thanks to Master Box, DragonUSA, and IPMS/USA for the review kit.