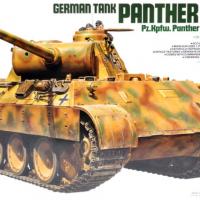 I remember assembling my first Tamiya Panther kit back when I was in college; a wee bit before the Paleozoic. That was in the heady days when a typical tank model could be thrown together over a weekend. What they lacked in detail was more than made up for by expeditiousness.

My last encounter with the Panther D was with Italeri’s release, which I made some years ago. This kit had poorly rendered wheels and other shortcomings, but was still an enjoyable build. This latest release from Tamiya, however, eliminates these shortcomings and offers what may well be the definitive Panther D.

What the kit provides is about 300 parts in firm tan plastic, vinyl tracks, a little copper wire for tow cables and 3 decal choices from around the Kursk campaign. It also includes two crewmembers, one hiding behind the turret with binoculars. The kit features really nicely textured rolled armor plating on the appropriate major surfaces as well as full underbelly detail – the latter being something we’ve come to expect these days, but unusual in my earlier Panther modeling attempts when motorization was all the rage.

By the request of IPMS/USA, I assembled this kit with the assistance of several auxiliary kits also offered by Tamiya, including their individual track link set, metal gun barrel and photo-etch grill set. There is also a full engine available through another release if you want to throw that into the pot as well. Although all of these go a long way to enhance the final product, they are by no means necessary to producing an award-winning miniature from this kit.

As with any kit of this nature, I tackled the running gear first. Tamiya provides individual suspension arms, fixed in such a way that modeling them over rough ground is simply a matter of cutting off a few pins. The wheels are mounted with Tamiya’s usual polythene caps, but gluing them in position once mounted makes the fit a bit firmer. I then mounted the individual track link set rather than the vinyl tracks, taking my time to assure that they had the proper droop over the wheels. I encountered no problems with this comparatively tedious assembly stage and was finished within a couple of hours. Whether or not to use these is up to the modeler, of course. Putting the sag in the upper run isn’t particularly vital, as this is covered by the side shields anyway. BUT the open guide teeth are clearly visible and contribute greatly to the final look.

The rest of the model went together with few complications. In the entire model, the only filling or sanding I found necessary was around the commander’s cupola to get the two halves to blend more smoothly. Everything else went together in the clockwork manner that one has come to expect from Tamiya. Two crew figures are included, which are assembled somewhat differently from typical Tamiya figures and in fact seem to have been sculpted by someone new, as the details and folds are far sharper than typical, in my opinion. The poses are also somewhat more inventive as well.

Every hatch is openable, including the engine hatch, the pistol ports, and shell ejection port, providing a lot of flexibility in terms of diorama potential. The surface detail is especially nice, as the slightly pitted surface armor is depicted well as are the weld seams, although the latter seem a little too regular and fine for my personal taste. The tools are well depicted, and if you replace the string with some twisted wire or solder for the tow cables you’ll add a little finesse to this area of the kit.

I added the metal gun barrel accessory package to the kit, which also includes a detailed gun breech. Although this was a nice addition, I’m not sure how necessary it is, as the plastic barrel looks pretty good in its own right, and the breech itself isn’t really all that easy to see on the finished model. Still, nice to have it.

The engine deck has some nice fan inserts that go in from underneath, so be sure to paint these and install them before completing the hull assembly. I also got to add the photoetched grille set to the engine deck, and I think this added a lot to the final look. Very nicely done they are, too.

In the final stage of completion, I wanted to check out the decals in particular, as the side numbers on the turret were obliged to fit over some raised detail. In the past, Tamiya’s armor decals have posed a problem, as they often were quite thick and uncooperative, but these conformed using Microsol remarkably well, making this part of the process much easier than I’d anticipated. Hats off to Tamiya for improving this part of their armor kits.

The final result is a really excellent representation of this mark of Panther – far better than the older Italeri example, for instance. As to the accessory kits, I doubt I’m the first to mumble about the added cost, as Dragon adds these particulars as a matter of course to their own armor kits. Of the three accessory kits I worked with, I would recommend both the track and photoetch sets particularly, as they both really add something to the model. The barrel set is a bit redundant, but still is a nice addition if you want to add a bit of interior detail to the kit.

Without doubt, this is the finest Panther Auf. D I’ve had the pleasure of building. As I now have some nine Panthers of various marks in my collection, I can definitely consider this one of the finest.

My thanks to Tamiya/USA for the opportunity to build this one with all the bells and whistles, and to IPMS/USA for a chance to play with all these magnificent toys.

Completed right side
Previous Next