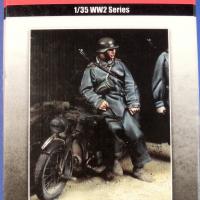 This is another finely sculpted resin figure from The Bodi. The figure is sculpted to be leaning against a motorcycle and has a recess on his butt for the motorcycle seat. The figures body is molded in a full-length leather greatcoat that is pulled back and buttoned around the legs. There is also a recess across the back for the rifle slung across the shoulder. A gas mask canister is strapped under the right arm, but there is no other equipment. The figure does have goggles around the collar.

The body has a pronounced mold seam running up the side of the legs and up the sides of each arm. There is also a seam in the figures jacket running up the arm so make sure to remove the mold seam, not the jacket seam. There is flash between the two legs that will need to be removed. The figures hands are not gloved and have good detail. Straps and the figure’s belt are crisply detailed.

The head is very nicely sculpted with nice detail for the eyes, nose, and nicely sculpted hair on the back of the head. The helmet to has a nice crisp rim and rivets for the helmet liner. The front visor portion of the helmet does appear to droop slightly. The expression on the figures face doesn't appear to have much emotion. The head has a very slight mold seam from the back of the neck over the helmet and down the center of the face. The side of the figures nose was slightly misshapen and needed correction.

The Kar 98K rifle is nicely detailed. There is some minor flash around the trigger, between the barrel tip and the cleaning rod, and at the end of the bolt, but these are very minor. My rifle had a slight warp but is easily bent back into shape. The rifle is meant to fit in the recess along the figures back.

I painted the figure with Vallejo and Tamiya acrylics. The three parts fit together without any problems.

This is a nice figure with good detail and a relaxed pose. Thanks to The Bodi for producing the figure and providing a sample to IPMS for review.

Finished Side
Previous Next