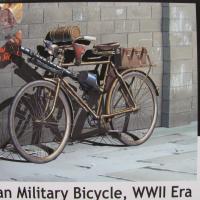 If you are looking to add something unique to your collection of 1/35 scale German military vehicles, or to spice up your next diorama, you may want to consider the bicycle that was recently released by Master Box Limited. Although it is a challenging build, those modelers with photo etch parts experience will be able to turn out one of the implements used by the German Army throughout World War 2 that does not get a lot of press.

As the onset of WWII approached, most nations were putting the simple bicycle to use as a means of faster transportation for troops and messengers that did not rely on anything but the power of the rider. In researching my build, I found a multitude of online photographs of bicycles in numerous settings, and carrying various loads. As part of the German “blitzkrieg” offense, bicycles provided a convenient way to move troops without the expense of using motorized vehicles. Although there were variants purposely built for the use of the Army, there were also civilian variants that were put to use to provide even more bicycles when manufacturers could not keep up with the demand.

Although unintimidating when opening the box, the diminutive bicycle is a little bit of a challenge, and I would highly recommend having experience with photo-etched parts prior to taking on this kit. Inside the kit is a plastic bag that looks very small when compared to the size of the outer cardboard box, as it barely fills a third of the available space. The kit consists of two connected plastic sprues with a total of twenty-two parts, a photo etch fret with thirty-eight items, and a single sheet of paper with directions on one side, and part layouts and a brief history in four languages on the other. To build my kit, I used Vallejo German Grey, Leather Belt, and Oily Steel as well as Model Master Black Enamel Wash, Model Master Lacquer Silver, and Tamiya Clear Red.

As far as my hits are concerned, this is the best bicycle kit that I have come across, but it is only the second one that I have built, the other being from Tamiya. The photo-etched parts add a great deal of realism, and the plastic parts have a great level of detail in them. The choice of weapons carried include a mine, hand grenade case, MG-34, 7.92 mm ammunition can, or pair of panzerfausts.

For misses, I would have to start with the directions, as it is difficult to tell in the small line drawings where some parts are meant to connect, and some parts are not mentioned, such as the pedals. I also found the plastic to be brittle as the crank arms for the pedals both broke as I was removing one from the sprue, and the other while cleaning the area where I separated the part from the sprue. I was able to glue one back together, but the other required the use of a piece of wire to replicate the crank arm, as I was able to save, or at least find only the pedal.

During my research for this build, I found photos showing two rear wheel racks, one being a frame similar to the one replicated using the photo-etched parts, the other being of a tubular construction. I mention this as the builder could easily round off the edges of the provided plastic rack, and avoid what could be the frustration of building the PE version. For some reason, I had issues with my CA glue setting while building my rack, and I ended up having to glue parts in place multiple times (I was using a thin CA mixed about 3:1 with a thick CA). The other challenge was regarding the inner spoked wheels, as I am not certain how they are intended to attach to the tires. I first attempted to fit the wheel inside the tire, but found the wheel diameter too large, and I bent the first PE wheel during the fit, but was able to remove it and straighten what I had bent. In the end, I simply attached the outer circumference of the wheels to the inner circumference of the tires, and did not force them inside.

In conclusion, I would highly recommend this kit to modelers wanting to add a unique mode of transportation to the WWII collection, or to a diorama, but emphasize the importance of having PE experience to avoid possible frustration. As I mentioned, this is the best bicycle kit that I am aware of in this scale, and in the right hands, can be a very attractive build.

My thanks to the folks at Dragon Models USA for providing this review kit to the IPMS-USA, to Dave Morrissette, who runs the Review Corps, for allowing me the opportunity to appraise it, and of course my appreciation to all who take the time to read my comments.