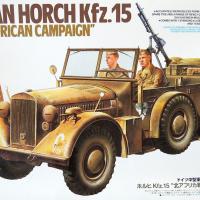 This kit is a collaboration of Tamiya and Italeri. Most of the vehicle is a reissue of an Italeri kit, with new parts supplied by Tamiya. The kit goes together nicely, with good detail, and is a fun model to build. The kit includes 3 figures and many diorama accessories.

The German Horch Kfz.15, a 4WD transport vehicle that was equipped with a liquid-cooled 8-cylinder engine capable of producing 85hp. Production of the vehicle began in 1937, and it saw action with the German military in a wide range of combat zones from Russia to North Africa. This particular kit has marking options for two dark yellow North Africa versions and one German gray version used in Russia.

Vehicle parts on sprues A & B are from Italeri’s earlier kit, which is about 20 years old. New parts by Tamiya include a folded roof, cargo area surface, rear-view mirror, taillights, tires, and front window. Tamiya also provides three figures, weapons set, and many diorama accessories.

Kit comes on two large plastic sprues molded in dark yellow plastic, one clear plastic sprue, and six rubber tires. These parts are all bagged separately and appear to be made by Italeri as the bag is marked ‘Made in Italy’. Tamiya parts include 3 figures and accessories, one weapons set sprue, a small decal sheet printed in 2014, and a instruction sheet printed by Tamiya in 2014.

The decals are new to this version of the kit and appear to be in register and have nice detail. Marking options are included for Luftwaffe Propagation Company, North Africa, 1943; 220th Armored Reconnaissance Detachment, 164th Light Africa Division, North Africa, 1942; and Signals Battalion, 24th Panzer Division, Russia, 1941.

The instruction sheet is Tamiya’s typical foldout sheet with 16 steps and three marking and finishing options. Notes on the instructions are listed in Japanese, English, German, and French. Tamiya includes painting instructions for all the parts, and notes that any part not indicated otherwise could be the vehicle body color. Paints are listed in Tamiya colors.

The parts show good detail. There is only very minor flash and mold seam lines are not very apparent. The mold seam on the extended vehicle top is quite large and will need a bit of work. The kid offers both a folded up and extended canvas top for the kit.

The kit includes 274 parts and 6 rubber tires. The plastic used is fairly hard, consistent with Tamiya’s other kits. The parts cut cleanly off the sprue and clean up easily. The kit does not use as many molding plugs as more contemporary kits so cleanup is held to a minimum. There are very few sprue connection points even, on the larger parts.

Assembly starts in steps 1 through 4 with the interior of the vehicle. The parts go together very nicely without any trouble. I did not install the seats at this time and will wait until later after painting. The decals for the dash gauges are one piece and they can be installed later after painting also.

Steps 5 through 9 are the installation of the driveline, suspension, and tires. There is no engine provided with the kit. The suspension parts fit nicely together and I had no trouble with the assembly. In step number 9, when installing the front bumper, it became apparent that there was some warpage in the frame causing misalignment of the fenders. The frame was easily bent back and the bumper used to hold the fenders in alignment.

In step number 10 the door panels fit very nicely, with nice hinge detail, and the door can be modeled in an open position if desired. The body assembled to the chassis well with a little sanding of the top of the hubs for the spare tires to get a tight fit of the chassis rails to the underside of the body. I also needed to sand off the bottom corner of the square protrusion on the firewall to clear the inside fenders.

Steps 13 through 15 complete the exterior assembly of the vehicle. In step 13, I assembled the cowlings B46 and B47 to the body, and then the grill, then assembled the hood. The parts fit fairly well. I think it would be better to glue the cowling, grill, and hood together, and then glue that assembly to the body to minimize gaps.

In step 15, I did not install the clear windshield glass until after painting the vehicle. There are options to install the windshield up, or down in a canvas cover.

The kit’s instructions show assembly of the rolled up top cover for the vehicle (in the down position). There is a considerable gap between the rolled-up canvas top and the folded framework that needs to be filled. There is also a canvas top in the raised (closed) position provided with the kit, but curiously there are no frame members to support the top, and it is not mentioned in the instructions. The kit does include clear plastic windows for the raised canvas top.

Italeri includes optional panels, parts B101, to close off the openings if spare tires are not used, that are not explained in the instructions.

I decided to use the paint in marketing scheme A, Luftwaffe Propaganda Company, North Africa, 1943. The vehicle was painted with the Vallejo dark rust, A.K. Interactive Worn Effects, and the base color is Vallejo dark yellow. Chips and wear were added by sponging with Vallejo dark rust, a MIG brown wash and MIG dry mud pigments were then applied.

The Tamiya decals are very thin, conform to details with MicroSol, but are susceptible to getting crumpled.

Step 16 is the assembly of the figures and accessories. Three figures are provided; a driver, crewmember, and a standing officer. There is a fairly good detail on the figures but some filling of the shoulder seams is required on the driver and crewmember. The standing officer is molded in way too many parts. There are two halves to each boot which results in an another seam to deal with, the hand holding the canteen has a separate thumb that must be glued on and looks rather chunky, and the tunic collar and shirt collar are molded as separate pieces that must be glued to the body. The officer’s cap is separate from the head, although there is no alternative provided. Also the goggles are separate from the cap that must be glued on and straps provided. It would have been better to mold the goggles as part of the cap so the straps could be molded on. The epaulets are also separate pieces that must be glued on, and look way over scale in thickness. The standing officer results in a nicely detailed figure but the many joints between the separate parts require a lot of clean up to look presentable.

The Tamiya weapon set supplied with the kit has a multitude of different types of weapons. There are 15 rifles or machine guns, three pistols and holsters, assorted grenades, landmines, ammo clips, and tripods for several of the weapons. There are also grenade cases, magazine cases, ammo cans, a table, jerry cans, a briefcase, and a cactus. A map is provided on the instructions to be cut out and placed on the table.

This is a nicely detailed and fun kit to assemble. The parts go together very well and the many optional parts allow for a great variety in the vehicle. All of the accessory parts and figures can provide a nice little diorama setting right out of the box.

Thanks to Italeri and Tamiya for combining to produce a new update to the German Horch. Thanks as always to the great IPMS review crew for the opportunity to review this nice kit.