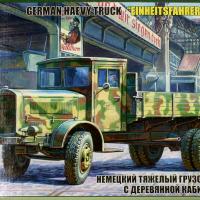 The L-4500 German Heavy Truck was a design caused by the shortage of metals during 1943. To reduce the amount of metal used in fabrication, the following design changes were made: the front fenders were made of sheet metal, the cabin was made of plywood on a wooden frame, and the front and rear bumpers were eliminated. These modifications stayed in production through the end of the war.

Step 7. The instructions are designed with several subassemblies (labeled as a letter after the step number: in this case, 7-a is the base unit, parts are added to make 7-b, and more parts are add to make final subassembly 7-c) shown of the left side of the page. The step-by-step portion shown on the right side of the page illustrate how these subassemblies are glued to the model. Step 7 is the build of the frame using completed subassembly 7-c and additional parts. Make sure that the frame is aligned properly as everything else attaches to it.

Step 8. This step builds subassembly 8-a (tow hitch assembly) and several other parts to the frame.

Step 9. This step adds the engine to the frame as a subassembly 9-a, but the main instructions have you build the truck cargo bed. Be careful at this step as this kit has many parts from their original truck model 3596, the Mercedes 4500S. The cargo bed from the Mercedes kit is included; you may want to kit bash and see if it fits, your choice. You should also add part D5 (cargo bed extension) here instead of in step 16, so you can paint and weather the cargo bed as one piece.

Step 10. This step adds the support frames and the spare tire holding bracket. As a post-build suggestion, don’t glue part A13 (spare tire holding bracket) to the model until the very end of the build. Paint and weather the cargo bed now, as it will give you access to the support frames which are very visible from the side and are very difficult to get to after the cargo bed is attached to the truck frame. The spare tire is built now and can be painted and weathered, then set aside until the end when you glue in part A13, the spare tire holder.

Step 11. This step attaches the cargo bed to the truck frame. As a post-build suggestion, paint and weather the frame now. Then attach it to the cargo bed, touching up the attachment brackets after the assembly is complete. Do not insert the spare tire now.

Step 12. This step adds the subassemblies 12a (fuel tank) and 12b (exhaust pipe and muffler). These can be painted off the model and then added. The leaf springs are added now.

Step 14. This step has three subassemblies: 14a firewall and windscreen, 14b front seat and gear levers, and 15ac rear wall. There are three clear plastic parts to be added here. I glued them in and then masked them for painting. Since these are interior parts of the cab, you will need to paint and weather prior to assembly. There are no decals for the instrument panel. I borrowed some from another model, not knowing if they are anywhere close to being accurate, but it makes the dashboard look a lot better. My guess is that the aftermarket decal makers will come to the rescue shortly. Now the two side panels will be painted on the inside, then added to subassemblies 14a and 14b

Step 15. This step completes the basic cabin by adding the roof and subassembly 15a to the base cabin completed in step 14.

Step 16. This step shows part D5 (cargo bed extension) being added here. This should be done in step 9. In the mating of the cabin to the frame, I found that the cabin would not set correctly on the frame as there was some interference with the engine transmission. After milling off part of the top of the transmission, it fit okay.

Step 18. In this step you will need to decide if you want the hood open or not. If so, you will need to cut whichever panel you want to open it. This step also builds the radiator, and here you will find there’s a big Mercedes emblem molded into the front of the radiator. Even after you have milled/scraped/sanded the three prongs off, they are still visible on the screen. Zvezda should have included a correctly molded radiator.

Step 20 and 21. This step builds the two doors. These doors include 4 pieces of clear plastic. I glued them in place and then masked them off for painting.

Step 22. This step adds the fenders and the two side doors. Make sure you remove any masking of the clear plastic parts from the interior of the cab prior to gluing the doors in place.

Step 23. This step adds the subassembly wheels to the front and rear. You should paint the rear wheels prior to gluing them together to make the rear double wheels.

Step 24. This step prepares the radiator cap by cutting off the Mercedes emblem. Then the additional items (headlights, windshield wipers, etc) are added.

Step 25. This is the final step; you will add all the fragile items to the kit and any other items left off till this step. At this point any handling will need to be done with extreme care as there are too many very delicate items extending from the truck, just begging to be broken off.

Painting and Decals.
The paint colors listed only Model Master Enamels. The instructions did suggest that the model be washed before painting, and it needed it. The only suggested paint scheme is a dark yellow/dark green/red brown three tone camouflage. The decals only have Zvezda’s name on them and they were satisfactory for this kit.

Conclusion: This kit is a fine addition to the growing number of support vehicles making their way into the market place. It will allow dioramas of rear areas, transporting supplies, and general usage.

I’m sure there are others.