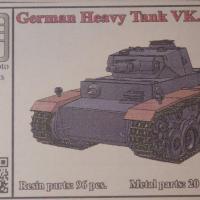 OKB Grigorov is a small model company based in Bulgaria that you may not be too familiar with. The company focuses primarily on AFVs, tanks, and naval ships in 1/72, 1/350 and 1/700 scales and they have an extensive list of products available. They produce full resin kits with photo-etch enhancements, as well as resin, photo-etch and white metal conversion pieces for other models. More recently, they began producing some plastic AFV kits.

The kit I reviewed is a 1/72 scale version of the German Heavy Tank VK 30.01(h). The VK 30.01(h) was really the start of Germany’s heavy tank program and the precursor to the Tiger. It was originally designed in the late 1930s, and by the end of its development cycle, only about half a dozen chassis had been completed, with less than 10 turrets. The times overtook the design, and before it could go into production, the design was obsolete. Still, a few of its components were seen on later heavy tanks. The VK 30.01(h) weighed in at about 30 tons and was the first to use interleaved wheels to support the weight. This same design was later seen on the Tiger. While the tank never saw combat, a few of the finished turrets were used as static defense bunkers on the Atlantic Wall.

The kit comes in a small cardboard box, which holds a few small plastic bags with loads of resin parts. In fact, when you open the kit and see the bags stuffed full of resin, it can be a little overwhelming. However, once you started opening the bags and looking at the parts, the exceptional detail is impressive. The parts are molded with little to zero flash and they’re all still attached to their stubs, so take care when detaching the pieces. This is especially true for the road wheels and drive sprockets with their round connection points. There are 96 resin parts, which includes the turret, the lower hull, upper chassis, and six sections of resin tracks. Also included is a sheet of photoetch with 20 parts on it. The instructions, which leave a lot to be desired, are just a two-sided photocopied drawing of the parts with numbers assigned to each part on one side and close-up drawings of sections of the tank on the other side showing where each part and photo-etch piece goes. There’s not really a “step 1, step 2, etc.”, it's literally just pictures of various parts of the completed kit with lines drawn to identify, what parts are used for each section. This is definitely not something for a beginner. The kit does not come with any decals, but the few pictures there are of the vehicle don’t indicate that it had any markings.

Although, there is no official “step 1”, you will need to attach the lower hull and upper chassis together first. This is because if you want to start this kit where most tank kits start, with the suspension and wheels, the upper and lower halves of the hull need to be together first. The return rollers and a couple of access hatches have attachment points partially on both pieces. Assembling the suspension, road wheels, drive sprocket and return rollers consists of 39 parts on each side. This is comparable to a 1/35 scale kit, and really demonstrates the detail of this kit. The parts need some care when attaching them to make sure everything lines up, but assembly was pretty easy and there is minimal clean up needed.

Since there’s really not an order to the steps, I figured I’d move onto something a little easier for the next part, so I moved onto the turret. This is mostly complete with just a few photo-etch pieces to add, as well as the main gun. The main gun on the 30.01 is the 7.5 cm KwK 37, which was the same gun mounted on the early versions of the Panzer IV. The kit part is molded in one piece, along with the front part of the mantlet. The part is very nicely molded and fits nearly perfectly to the turret. Next to the main gun, is the coaxial machine gun port, where the machine gun barrel is placed. The turret base has a rather thick pour stub, which will need to be removed prior to mounting the turret onto the chassis. Not hard work, but it’s a pretty thick piece that will take a little time to cut off.

Next, I moved onto the muffler and exhaust system at the back of the tank. This consists of three resin parts, the exhaust pipe, the muffler, and the inlet pipe, as well as a photo-etch screen. When cutting the inlet pipe off of the pour stub, make sure to cut it down at the base near where it connects to the stub. This will make installing the part onto the muffler, and back into the opening in the chassis easier. I didn’t and had a difficult time getting the part attached correctly. Luckily, I was provided an extra piece for this part and was able to use the backup. The photo-etch screen goes into the opening on the underside of the chassis. I was unable to get the screen installed, and still attach the inlet from the muffler, so the screen was left off. This part is facing down and at the back of a cramped space, so it’s not a noticeable item.

There are a couple of engine exhausts, that are mounted to the chassis sides, but those should be held off until the photo-etch fenders are attached, and the fenders need to be attached after the tracks are on the vehicle. This meant I was out of ways to delay working on the tracks. As mentioned earlier, 6 pieces of straight runs of track are provided. This gives you ample length to work with. The tracks are beautifully molded, they even have hollow eyelets on the guide horns. It’s really amazing detail. Prior to attaching the resin track runs, I heated them with a hairdryer to give them enough flexibility to bend around the sprockets and return rollers. This worked great, and I was able to use the hairdryer to make the suspensions loose enough to straighten out the wheels too. You’ll end up using about two and a half of the track runs per side, which will give you plenty of extra track for the spares box or to add some spare track to the fender as I did.

I would like to point out that the photo-etch felt thicker, or stiffer than what I’ve used in the past. In some cases, like the fender brackets, this made folding/bending the photo-etch parts a little more difficult. While working on one of the fender brackets, it slipped and shot across the room never to be seen again. I ended up replacing the part, and its opposite part, with plastic sprue replacements. The photo-etch is pre-scored for the bend points, but I still had difficulty getting some parts correctly shaped.

Overall, the finished product looks very nice. The details are very well done, and the parts are superbly molded. I finished the tank in an overall Panzer Grey, with no markings. While I had my trepidations going into building this model, I was pleasantly surprised at the relative ease of construction, and impressive detail. My biggest issues had to do with working entirely with CA glue, not the kit itself. I’d recommend this kit to someone with an interest in rare tanks, or a collector of German tanks. While this tank never saw combat, it is actually a pretty important step in the development of the Tiger tank later in the war. Due to the all resin and photo-etch nature of the kit, and the lack of clear instructions, it’s a better kit for model builders with experience using these parts and working on short-run kits.