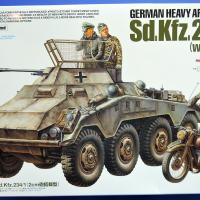 This is a nice kit that is fairly simple to build, yet ends up with a model with good detail. The 3 additional figures have the added benefit of creating a vignette right out of the box.

The kit is a rebox of the Italeri kit to which Tamiya has added three figures, motorcycle, weapons set, and an updated decal sheet. The main kit is the original Italeri issue on four light brown sprues. Tamiya has added three separate sprues for the German Infantry Equipment Set B, the three figures, and the motorcycle. There is also a small fret of parts B37 & B38 that apparently replace the original parts.

The instructions are Tamiya's typical stapled booklet with nice exploded view diagrams. Paint colors are called out in Tamiya colors and the kit has two marking options - an unknown unit on the Eastern front in the winter of 1945 to 1945, and the 2nd Panzer Division in Normandy, summer 1944. The German Infantry Equipment Set B has its own separate instruction sheet.

The suspension for the vehicle appears to be well detailed with numerous parts. The interior of the hull looks simple with just the driver seat, lever, and steering wheels. The detail for the interior of the turret is limited to the gunner seats, control wheel, and mount for the 2 cm gun.

The few decals just include the German cross and the vehicle number. The remainder of the decals are for the motorcycle placards.

The first 5 steps are installation of the suspension elements and tires. The lower hull is molded in one piece and is free of distortion. There are lots of small pieces for the suspension, but the fit is good and they go together very well. I didn't install the wheels and tires at this point so they can be painted separately later on.

Steps 6 and 7 assemble the interior parts, which are a few, and there is very little detail. No engine is provided with the kit. The interior is completely enclosed by the upper hull and none of the interior pieces will be visible after assembly is complete without cutting open the hatches. The upper hull fits nicely to the lower hull. I glued one side first, let that dry, and then glued the other side. Most of the side joint between the upper and lower hulls will be concealed by the fenders. A small amount of putty was necessary to close the seam at the rear of the vehicle.

Steps 8 through 16 install the upper hull and the exterior accessories. None of the exterior louvers or hatches are openable to view the interior. The instructions say to install the alternate parts B37 and B38 included with the errata sheet. These appear identical to the original parts, so I'm not sure what the difference is.

The jerry cans and brackets in step 12 are nicely detailed, and are newer parts compared to the old Italeri cans.

Steps and 17 through 22 are the assembly of the turret elements and the guns. Some photoetch detail is provided for the sights on the gun and the mesh covers for the turret. All of the parts go together really well. The turret can be left unglued so it rotates, and the gun mount will elevate.

The gunner figure is in six pieces, two legs, two arms, torso, and head. The parts go together very well and the figure sits comfortably on the back of the turret. The commander figure is in four pieces - head, two arms, torso, and legs. The radio headphones are separate from the head. The instructions show the headphones laying around the neck on top of the shoulders, however the commanders arm is reaching to pull the headphones. The headphones will fit around to the cap so I placed them over his head with the hand touching the right headphone. The sprue for the figures is dated 2002.

Tamiya’s German Infantry Equipment Set B is included with the kit and includes numerous weapons, ammo packs, three different helmets, grenades, shovels, gun holsters, etc. The motorcycle figure is the only one that allows optional helmets. I put the gun holsters on all three figures, a rifle on the back of the motorcycle figure, and all of the other equipment parts went into the spares bin. Strange that an infantry equipment set is included when there aren’t any infantrymen

The motorcycle has been issued several times in years past as a separate kit by Tamiya. The motorcycle goes together very nicely and the parts fit very well. The sprue for the motorcycle is dated 1999.

Two painting options are provided, one for the Eastern front during the winter of 1944 to 45 in a whitewash camouflage. The other option is for the 2nd Panzer Division in Normandy in the summer of 1944, in a dark yellow color.

This is a compilation of kits and parts that have all been previously issued, but are combined together into this kit. The kit and figures go together very well and provide good detail. This is a fun model and not too difficult a kit to build.

Thanks to Tamiya for providing the review sample and to the IPMS reviewers for the chance to do this review.