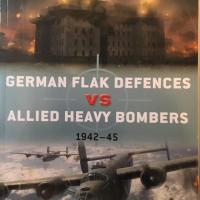 As with all the Osprey Duel series books, most of the book provides a detailed description of the weapons and equipment involved. This book is no different with a large section of the book covering the various heavy bombers used by the Allies from the early RAF Short Sterling and Halifax bombers, to the US B-17 and B-24 heavy bombers. Interestingly enough, while the Lancaster is discussed, in the book, the Sterling bombers receive more attention, which is mostly based on their inadequacies. The book has an extensive section dedicated to the various flak guns, with detailed drawing and many photographs of the various types used by Germany. Osprey's Duel series is a well-established line of books providing an overview of machine-on-machine combat action from design and development through combat. The books include a thorough analysis of the elements which affected the overall outcome of specific battles, or operations.

This volume focuses on the strategies of the Allied bombing campaign, and Germany’s attempts to stop or slow the onslaught of heavy bombers operating day and night over the Third Reich. This book works through the background and strategies of both belligerents, the equipment both sides used, the tactics employed, and a nice summary of the effort with a full analysis of the effectiveness of the German Flakwaffe.

I was really impressed by the section of the book covering the amount of training the RAF, and the US put into preparing their pilots and flight crews for active duty. Each position on the bombers receives some coverage about the amount and types of training each position needed, from the Pilot at the front to the gunners in the rear of the plane. Just as fascinating is the description of the training given to each member of the flak crews, with some of the bigger flak guns requiring 13 or more personnel to operate them. After reading the description of this training, it seemed obvious, but I had never really considered it prior to this book.

Overall, this was a quick and interesting read. While the book did include numerous interesting photos, drawings and diagrams, I'm all for more of all of those things. Still, for an 80-page book, this one is pack with really interesting facts, and excellent commentary. I'd recommend this book to anyone with an interest in the air war over Germany throughout the second World War.