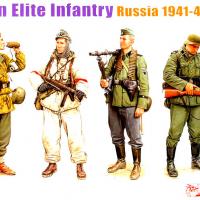 This kit from Dragon features four German Waffen SS infantrymen as they would appear in the early years on the Russian Front. The term “elite infantry” is used as a euphemism for the SS, and while some of the SS divisions could fit into the elite category, some could not, such as the 4th SS Polizei Division, represented by one of the figures on the box art. These figures do not have to be painted as SS soldiers; you could do them in markings of army troops, and the sniper could be painted as a member of the Luftwaffe’s Hermann Goering Division, which used SS camouflage clothing.

The figures include a sniper in camouflage smock, an NCO with MP 40 machine pistol in winter dress, a machine gunner with MG 34 from the 4th SS Division, and an infantryman loading his rifle.

The box contains 5 spues in Dragon gray plastic, with a total of 138 parts. The main sprue has the parts for the figures. There is a sprue with more weapons than you’ll need (4 rifles, 3 MP 40s, and one each MG 34, MG 42, MP 44, and G 43), and a sprue of field gear with canteens, helmets, ammo pouches, gas mask canisters, bread bags, etc. Finally, there are 2 small sprues with 4 entrenching tools each, one having the one-piece shovel and the second with the early folding shovel. While the box states Gen 2 Gear, and it is even depicted on the side of the box, much of the field gear and weapons are not the more detailed Gen 2 types. The machine guns have slide-molded barrels, but the other weapons do not, and the rifles in the past had separate bolts – not so with these. The bread bags, that universal carry-all of the German soldier, are not Gen 2 either; the belt loops are missing and must be added from paper or plastic card on all the figures.

Assembly is pretty straightforward – seams and minor flash will have to be removed, but everything goes together well. The field gear, such as ammo pouches and bread bags, will require carving or filing to get these parts to fit properly on the figure.

This figure carries a rifle with Zf 41 scope, often issued to the best shot in a company. He is in a camo smock and taking a swig from his canteen, a nice relaxed pose. His smock has a drawstring around the waist, resulting in the “spare tire” below his belt. This raised area will have to be filed or carved away to add the bread bag and entrenching tool. The sniper’s rifle has the trigger guard filled in, an annoyance considering the advancements made in modern molding techniques. I sawed the fore-end off the sniper rifle just in front of the bolt, then used one of the spare rifles from the weapons sprue which has an open trigger guard. I sawed the rear end off this rifle, and glued the 2 halves together. There is a slight seam, but the figure’s hand is holding the weapon here and it is not visible. The canteen with cup requires some additions of strips of plastic card to represent straps. I also added strips of paper to the left ammo pouch to represent the helmet strap.

The NCO in Winter Suit

This figure could also be an officer; he is equipped with map case, pistol, and binoculars. His uniform could be painted white, mouse gray, or camouflage. He can also wear a helmet or the M43 cap. On the box art, you see this figure has colored arm bands. These were for identification, since the Soviets also issued their troops white snow uniforms. Arm bands could be worn on one or both arms, and I have seen red and green, with other colors being worn as well. These are not molded on the figure, so I added them from strips of paper.

This figure is shown on the box art as a member of the 4th SS Police Division, which was made up mostly of German policemen. His collar insignia was not standard SS, but a police insignia much like a German army collar insignia. If you do not wish to paint him as a member of 4th SS Div., file this insignia off. He is also shown with a machine gun belt worn over his shoulder, a common way to carry spare ready ammo. Dragon provides 2 belts of ammo on the main sprue. I decided to try adding an ammo belt, although I’ve never had much luck with these. The ammo belt has three thick connection points to the sprue, including one right in the middle, so where the part needs to bend, the belt is overthick and rigid. I tried sanding the back thin, cutting the belt with a fine saw, and gently bending it. It was still too thick and it wound up breaking. I decided to abandon the ammo belt idea, but still wanted to add some way for this guy to carry some ammo. On the main sprue are two carrying cases for machine gun snail drums. These are not shown in the instructions. These cases would each hold two of the 50-round drums that could be snapped onto an MG 34. The machine gunner’s left fist is closed and looks like he is holding something, so I added a couple of bits of stretched sprue to his hands and attached one carrying case with two drums inside. A bar to secure the drums, also on the sprue, is glued across the top. Finally, for some reason, the carrying strap for the gas mask canister is missing from the figure’s back. I added one made of a thin piece of paper. He also has his helmet slung; you can hang it from the canteen, holster, or the machine gun tool pouch, as I did.

The fourth figure is a man shoving home a clip of ammo into his rifle. To do this, the rifle’s bolt must be pulled back. In the Gen 2 Weapons set, you are given a choice of open or closed bolts for the rifles. Unfortunately, as pointed out, these are not Gen 2 Weapons. I looked through my spares for a rifle I could use, and I did find an extra Gen 2 open bolt part. Using one of the kit rifles, I sanded off the bolt assembly and fitted the new bolt to the gun. Dragon does provide several ammo clips, and I glued one to the soldier’s right hand. This figure also lacks a helmet strap, so I added one around the brim of his helmet.

Once those various little omissions are taken care of, I give the figures a shot of white primer and it was time to paint! There are several patterns you can use for the sniper’s camouflage smock; pick one from a reliable source. I painted a brown fall pattern. The white snowsuit was painted an off-white, made from white and light tan, allowing me to use pure white for the highlights. The field gray uniform colors are made from black, white, and Testors olive drab or flat green. I gave the tunics a greener hue, while the trousers and caps are on the gray side.

I use decals for insignia when I can, and I had a nice set of SS Decals from Alliance Model Works. I have used these in reviews before and they really make the figures stand out. I have painted insignia for years, and the advantage to the decals is uniformity of size and detail – you can read the inscriptions on the cuff titles. I used the decals on the collar insignia, caps, cuff titles, and sleeves. The machine gunner and loader received decals for the 3rd SS Totenkopf Division, and the sniper has a collar tab for the 23rd SS Regt., Norge, made up of Nordic volunteers.

After paper slings were added to the rifles and MP40, the figures got a shot of Testors clear flat. The NCO had the goggles picked out with some clear gloss, and they were done.

These are useful figures in realistic poses that should find their way into many dioramas. Thanks to Dragon Models and Dragon Models USA for supplying the kit, and IPMS/USA for the review space.