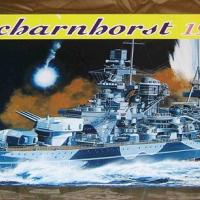 The Dragon 1/350 scale model of the German Battleship Scharnhorst is one impressive kit, not only in the size of the model itself but the enormous number of parts. The large box was stuffed full with 28 individually bag sprues, 5 photo-etched frets, an upper hull, a lower hull, a plastic base, a decal sheet, and an instruction sheet. If that was not enough, there wis also a supplemental photo-etched set of railings and other miscellaneous items provided by Dragon that was used as part of this build.

Looking at each of the sprues, it was noted that the detail was crisp with no flash or ejector pin markings that need to be addressed. It was also noted that there were a lot of small part (both plastic and photo-etched). Therefore, comfort with these small parts is a definite must for anyone considering building this kit. The smallest of these parts are used in the construction of the ships batteries, each of which is a kit in its own right, consisting of several parts and photo-etched detail. This is where the first step of construction starts. Cranes, boats, searchlights and other miscellaneous items are also included in this step. Care must be taken, since there are few spare parts to replace those lost to the carpet monster. This is also where there appeared to be an inconsistency between the directions and the kit (not enough parts to complete assembly as directed).

It was during breaks in the repetitive construction of Step 1 that I took a look at the Cyber-Hobby railing upgrade set. As with most photo-etched sets, the additional detail the fret would provide gives nothing to complain about. It was during these breaks that I compared the instructions from the upgrade set to the kit instructions. This is a definite must because without planning ahead it will be difficult to place some of the parts. In order to make sure this does not happen, I noted the upgrade part number on the kit instruction sheet so I would not forget to add the parts during construction.

Since the planking detail of the wood deck was excellent, I decided to try a new method of painting a natural wood deck. This would require painting of the deck part prior to the start of construction. Therefore, all deck parts were removed from the sprues and prepared for paint. This method starts with a base coat, in this instance, deck tan. Next, individual deck planks are painted at random with a lightened mix (70% base and 30% white) and a darkened mix (70% base and 30% brown) of the base coat. This is followed with a mist coat of the original base color to blend everything together. A wash of raw umber brought out the detail of the deck planking. To finish off the main deck, I taped and painted the anchor chain runs at the bow. These runs were hard to identify due to the planking detail. I was happy with the results despite the tedious work involved.

In a break with typical ship construction, the build proceeds from the top down instead of the main deck/hull up. Although this was new to me, I stayed with the directions; with the exception of leaving the fragile items (mast, yard arms, etc.) for the end. I was a little worried about parts aligning with the decks below, but the fit was exceptional and everything worked fine. That was until I got about half way through Step 6. The locations of several parts in this Step were vague. Test fitting to the deck below provided the needed positive attachment points for these parts. It was here that reverted back to the main deck/hull up approach. Following the instructions backward was a little tricky, but the build went much easier. Only two other snags were noted: The first was in Step 9, the platform that Part MC19 attaches to was not called out. I just made this platform from a spare sheet of plastic. The other was in Step 17, the splinter shield for the 37mm gun is provided (Part K73), but not identified on the instructions.

With several sub assemblies constructed, it was on to the painting process. The instructions provide paint call outs for Aqueous Hobby Colour, Mr. Colour, and Model Master paints. I used the Model Master Acrylics and an enlarged copy of the painting and marking page of the instructions. After some masking of the decks and coat of rattle can primer, I air brushed a base coat of light gray. While this coat was drying, I used light table (a glass table with a light shining up from underneath) and tape covered wax paper to create mask for the following colors, blue gray and dark gray. Spraying a black water strip and a coat of red on the lower hull finished up the painting process.

Since I reverted to the main deck/hull up approach and test fit along the way, I had no problems bringing the sub assemblies together. The addition of the main deck railings and other miscellaneous fragile items completed the Scharnhorst.

In summary, this kit is very impressive and a definite show winner straight out of the box. The railing up grade set makes this a museum quality kit. The Scharnhorst is a must have for any admirer of the Kriegsmarine. However, the complexity of the kit makes this one for intermediate skill level or above.

I would like to thank Dragon Models USA and PMS/USA for providing this kit for review.

Completed model port side from bow

Completed model port side from overhead
Previous Next